Not "Coming Out" Is a Straight Privilege 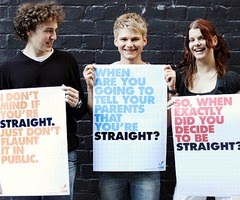 Many Christofascists and far right Republicans (is there a difference?) simply want gays to disappear - or in some case, simply die - so that there is no rocking of the boat of heterosexual privilege. Or, worse yet, to the Christofascists, no individuals who by the loves and existence might cause the Christofascists to question the allegedly inerrant nature of the Bible boat, something that might make their religious belief fantasy world collapse.  Hence, the constant condemnation of gays for "coming out" and allegedly forcing their sexuality on others.  Yet heterosexuals force their sexuality on others constantly and never have a second thought about having to justify their lives or their very existence.  Is it a double standard?  You bet.  A piece in Huffington Post looks at this double standard.  Here are highlights:

In light of Good Morning America anchor Robin Roberts coming out as lesbian (and thanking God for her partnership), a lot of straight Christians have been pushing the "why should gays make such a fuss about coming out when straights so politely keep quiet about our sex lives?" button. Again.

Well, here's a way to understand why we have to "come out." . . . . Name even one straight person who got fired and thus rendered homeless with their children simply because of their gender and marital status (in this case, marriage with someone of same gender), as happened to me recently. Not because of committing adultery, bigamy, rape, molestation of a minor, mind you -- just simply for being married or in a significant relationship. Until ENDA (the Employment Non-Discrimination) passes Congress for enforcement, every member of a lesbian and gay couple faces this threat. We also have no visiting rights to our partners in many hospitals, no legal right to make life or death medical decisions in face of the illness or injury of our spouse, and no health coverage for our marital partners, all things no straight person has to "come out" to fight for but can simply take for granted if and when applicable.

[A]lmost without exception, when a person in public life has "come out" with regard to sexual orientation, it has been to affirm their existing life partner, usually in a long-term relationship or marriage they have been hiding up to that point for whatever reason. Perhaps to avoid what's happened to me -- everything from death threats to public humiliation, loss of employment and employability, and all that entails -- losing one's home and the ability to support one's family, for example.

Of course straight people don't have to "come out" -- because they never have to hide their fiancé or spouse in shame in the first place (unless they actually are violating someone's child or spouse and SHOULD be ashamed). So I agree with the critics. Gays and lesbians SHOULDN'T have to come out. But that's only because we shouldn't be forced into hiding in the first place for having done nothing wrong -- only for committing faithfully to our life partner.

Like the author, I was fired for being gay after I came out.  I became largely unemployable with large local law firms and had to file bankruptcy simply because I had finally been honest about who I am.  Straights do not have to face this type of bigotry and discrimination.