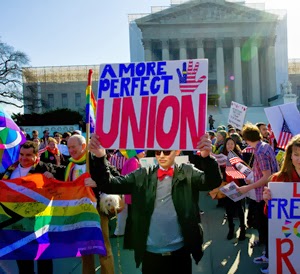 Today's first post looked at where gay rights may go in 2014.  As noted, there is much to be done and anti-gay animus remains far too wide spread.  If one wants to see but one example, to demonstrate the level of anti-gay animus behind Virginia's Marshall-Newman Amendment, the amendment was added to the Virginia Constitution's Bill of Rights of citizens as if the backers wanted to underscore that Virginia gays were indeed less than full citizens.  But I digress.  Looking forward in terms of the advance of gay marriage, an editorial in the Los Angeles Times posits that the courts will lead in making further advances happen.  This seems plausible in states like Virginia where Republican - slavishly obeying the dictates of The Family Foundation, an anti-gay hate group - will continue to block the repeal of anti-gay laws and constitutional amendments.  Here are highlights from the editorial and its analysis:

Even by the standards of this extraordinary year for gay rights — during which more than half of the 18 states that now recognize same-sex marriages were added to the list and the Supreme Court struck down part of the federal Defense of Marriage Act — the last couple of weeks have been remarkable. Within a few days, courts made gay marriage legal in New Mexico and Utah, and a ruling in Ohio forced some state recognition of such marriages.


But those recent court decisions have also fed the long-standing perception among conservatives that gay marriage has been pushed through by "activist judges" forcing their personal beliefs on an unwilling populace. In fact, most of the states where marriage is recognized got to this stage through votes, mainly by state legislatures but in a few cases by the people themselves through ballot measures. Of the 18 states, only seven, including California, legalized gay marriage through court decisions.

It is, of course, preferable for progressive marriage laws to reflect the will of the people. . . . But, in truth, the road to civil rights historically has involved a mix of approaches — popular opinion, lawmaking and court ruling — each affecting the others. The repeal of state laws against interracial marriage, for instance, followed this path, with a combination of judicial rulings and voluntary state repeals in the late 1940s and beyond until, in 1967, the U.S. Supreme Court overturned such laws in the 16 states that still had them. Some of the state decisions to repeal discriminatory marriage laws took place when a majority of Americans still favored such restrictions. But increased recognition of these rights by both legislatures and courts led to increased public support by the early 1960s.
It has been the same with gay marriage so far. . . . .  As a growing number of states have sanctioned gay marriages, more Americans have had an opportunity to observe that they have no effect on traditional heterosexual marriage, which in turn leads to more acceptance and more laws passed. And societal recognition has an effect on judges, whose decisions have reflected that growing acceptance at the same time that they have been ahead of it.

Now, the fight for same-sex marriage is entering a new phase. The low-hanging fruit — states without strong laws banning gay marriage and with more progressive populations — is pretty much picked and the new battles will be in stiffly resistant territory. In 32 states, same-sex marriage is banned by a combination of laws and constitutional amendments, which means change is less likely to come via popular or legislative votes. Courts will play a bigger role.

The most recent case in point: Utah, viewed as a hot spot of antipathy toward same-sex marriage because it is home to the headquarters of the Mormon Church, which strongly opposes such marriages. The state so far has lost its efforts to halt a ruling by U.S. District Judge Robert J. Shelby that struck down Utah's marriage ban.

One thing, though, is certain. Despite anger toward these supposedly anti-democratic decisions, judicial rulings have a necessary role to play in the advancement of civil rights, even when public and legislative opinion isn't on the same side. Especially when it isn't.

Candidly, I think the analysis is on point and, hopefully, one or both of the gay marriage lawsuits in Virginia will lead to the striking down of the Marshall-Newman Amendment if some other case before the U.S. Supreme Court doesn't do so first.

Posted by Michael-in-Norfolk at Wednesday, January 01, 2014