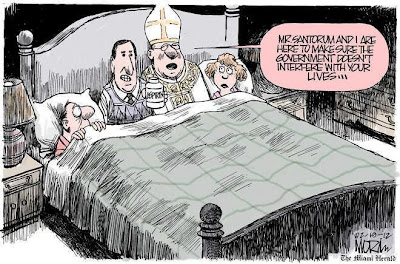 The Washington Post has an almost laughable article on how Rick "Frothy Mix" "Man on Dog" Santorum is displeased that much of the public has figured out that he's a sex obsessed prig who cares more about waging a culture war against gays, women and modernity than he does about rebuilding the nation's economy and stabilizing the real estate market. In many ways, Santorum is a bird of the feather with Bob "Taliban Bob" McDonnell who has done little to address Virginia's economic and transportation woes but who has shown no hesitation pushing the most extreme agenda of the Christianists at The Family Foundation. Santorum should have foamed at the mouth a bit less about gay marriage and women's right to use contraception if he's now concerned that women and sane members of the public see him for the untethered religious extremist that he is in fact. Here are some article highlights:

Rick Santorum does not plan to abandon the fiery Christian rhetoric or the shoestring campaign that got him to where he is today. But as a slate of high-stakes Republican presidential primaries approaches, he is being forced to shift his strategy to beat back perceptions that he is obsessed with controversial social issues and harbors outdated ideas about women.

[I]n Michigan, Santorum lost women to Romney by five percentage points, an edge that provided the former Massachusetts governor with his narrow margin there.

Although Santorum sought to spin the Michigan results as a tie, it is clear that the contest revealed a significant challenge for him. He has been outspoken about contraception, abortion and his wife’s decision to leave her career as a lawyer to home-school their seven children.

They insist that their economic message is being overshadowed by questions about Santorum’s social platform. . . . . Yet in working to shed his image as a hidebound conservative on women’s issues, Santorum risks alienating the network of home-schoolers, evangelical Christians and “values voters” who have powered his rise, first in Iowa and then in a string of February contests.

The challenge comes as his campaign tries to pivot to a more national footing going into Super Tuesday next week, when 10 very different states will hold votes.

Aides say they plan to curtail the mini-news conferences he has often held after events to limit his exposure to the media, which the campaign blames for what it considers a caricature of the candidate as a one-trick pony on cultural issues.

It's telling that campaign aides want to limit Frothy Mix's exposure to the media - I guess he they don't want the public to figure out that Ricky is a serious whack job. Fortunately, I suspect many have already figured out that Santorum thinks its 1912 (or maybe 1212) rather than 2012.
Posted by Michael-in-Norfolk at Thursday, March 01, 2012

sorry rick - you don't get to be the perpetrator and the victim.