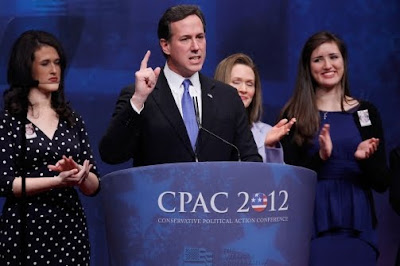 As regular readers know, I find Rick Santorum to be an abomination - even as he applies that term to countless Americans, gays in particular. I find Santorum to be a self-congratulatory, sanctimonious ass who, given his obsession with all things sexual, strikes me as being in serious need of mental heath care intervention. And given his obsession with gays, one has to wonder how he'd score on those tests that measured the penile arousal of homophobes while watching gay porn. Indeed, he would be almost comical but for the hatred, bigotry and intolerance that he engenders at every campaign appearance. That Santorum is fairing so well in the GOP primaries and polls speaks volumes about the decline of the Republican Party as a party that once at least outwardly valued logic, intelligence and reason. The thought of Santorum actually making it to the White House is very, very scary and, in fact, might be the straw that would make me pack up and leave the USA. Sarah Posner has a piece in the Washington Post that imagines what Santorum's America might look like. Here are some excerpts:

Rick Santorum , the culture warrior who lost his Senate seat in 2006 , is polling within striking distance of Mitt Romney in Michigan and Arizona, where Republican primaries will be held Tuesday. His unabashed use of his traditionalist faith in politicking and policymaking has been gaining popularity. What if he wins the nomination — and then the White House? What would life look like in Santorum’s America? How religious would his presidency be? Here, the author imagines what President Santorum would tell his key constituency — religious conservatives — as he ran for reelection four years from now. President Rick Santorum’s speech at the Values Voter Summit, Sept. 23, 2016.

Because of our values, we never gave up, and under my administration we have finally defunded Planned Parenthood. No longer will your tax dollars support that abortion mill or any programs that indoctrinate young girls to be sexual libertines — programs that say, “Here’s a pill, go ahead, have fun, it’s all about pleasure.” We said no — the government cannot force us to use our tax dollars to support unnatural acts.

One of my first acts as president was the creation of the Presidential Commission on Religious Liberty. Since its inception in early March 2013, the commission has investigated 249 instances of infringement of Americans’ religious freedom. Its quarterly public hearings, led by Chairman Maggie Gallagher and streamed live on the commission’s Web site, have served to educate Americans about the daily oppression of our faith, in the name of tolerance, by government and individuals.

We have gathered support for the Dignity of the Preborn Person Act, which, if passed, would recognize in civil law what we know to be true as a matter of God’s law: that every human life, at every stage, deserves protection. This bill ensures that each life, from the moment of conception, is entitled to the rights guaranteed by the 14th Amendment to the Constitution. When that bill becomes law, unborn persons will no longer be denied their personhood, their God-given rights to life, liberty and the pursuit of happiness.

We’ve reinstated funding for abstinence-education programs. We’ve broken down barriers left in place by my predecessor to faith-based organizations receiving funding under these programs. My Justice Department, unlike that of my predecessor, is dedicated to defending the Defense of Marriage Act in court, and my solicitor general will do so vigorously when the current challenge reaches the Supreme Court of the United States.

[W]e continue to push for repeal of the laws and regulations that stifle economic growth: Obamacare, Dodd-Frank financial reform, the Sarbanes-Oxley accounting rules. Lifting the yoke of all those regulations, along with securing our borders from illegal immigration, will both create and protect jobs for America’s workers. We’ve eliminated my predecessor’s boondoggles at the EPA and Department of Energy . . .

We fight many battles here at home, but there are other battles, too, against Islamic extremists who have their sights on America, on Israel and on Western civilization — Christendom itself. I rejected my predecessor’s dangerous appeasement policy and launched our air campaign against Iran’s nuclear sites, which will continue until we ensure that this existential threat to Israel and America is annihilated.

If you want Supreme Court justices who are constitutionalists, who believe that the abomination of same-sex “marriage” must be stopped before it destroys us, who believe that the “right to privacy” and “separation of church and state” were pulled out of thin air by activist judges, we need a filibuster-proof majority in the Senate.

Under Santorum, America would be headed back to a Middle Ages condition where only the few would enjoy a recurrence of the Gilded Age. Meanwhile, most of the the rest of the world would move forward and embrace modernity. The USA would be a very scary place for those who are not Kool-Aid drinking far right religious zealots.