The Gurus of the Religious Right Who Wrecked the Republican Party 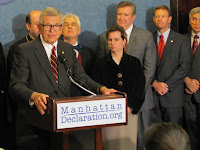 I've written about Frank Schaeffer before. His father was in many ways a founder of the far right Christianist movement that plagues the nation today and that seeks to merge far right religious belief with the civil laws in order to create a Christianist theocracy. Along the way Schaeffer recognized the danger and hypocrisy of the Christianist movement and now actively writes and speaks out to stop its agenda. But given his back ground, his insights and knowledge are most instructive. In a post on his blog he looks at the architects behind today's extremist controlled Republican Party. Here are some highlights:

Romney is a fake religious right "conservative." But the fact that he has to pretend to be to the right of the Pope on "social issues" tells us all we need to know about the intellectual climate inside today's Republican Party.

How did the Republicans get to be this way? Reading and watching media coverage of the 2012 elections you'd never learn the answer. That is because the media seem to have never heard of the intellectuals who fed the movement on far right religious hysteria.

When Rick Santorum - who is the real thing when it comes to authentic hate-driven misogynistic religious delusion -- talks about how the idea of the separation of church and state, as articulated by President Kennedy, made him want to "throw up," he was channeling the late Richard John Neuhaus. He even uses Neuhaus' pet catch phrase "the naked public square" to describe religion being "driven" from public life by "radical secularists" intent on using colleges to brainwash kids into pro-abortion, gay-hugging liberalism.

When Gingrich, Romney and Santorum defined President Obama's reasonable attempt to make insurance companies pay for women's access to contraception as being "anti-religious" and "anti-religious freedom" they were channeling Professor Robert George of Princeton University, Charles Colson, and my late father Francis Schaeffer

[R]eading media commentaries and watching the talking heads on TV you would never know that the radical right's takeover of the Republican Party has its roots in the work and writing of a few men and women who became the enablers of a radical religious ideology that they made respectable in far right circles. You'd also never know that places like Princeton University are providing intellectual "respectability" to radical far right theocrats like Robert George or that "mainstream" evangelicals like the editors of Christianity Today magazine regard far right homophobe Colson as a hero.

George's brainchild: the "Manhattan Declaration: A Call of Christian Conscience" was published in 2009 as an anti-Obama manifesto, and many Evangelical leaders signed on. It was written as a direct reaction to the Obama Presidency. It was a trap that launched a fishing expedition to find any issue that might gain traction with which to beat the President in 2012. That could have been gay rights, or stem cell research. It turned out to be contraception.

In case you've never heard of George, he's been a one-man "brain trust" for the Religious Right and the Far Right of the Republican Party as well as for the ultraconservative wing of the Roman Catholic Church.

There are a number of leading American extremist "conservative" Roman Catholics, like Professor George, who are part of a strange, informal, anti-contraceptive, anti-abortion alliance that Santorum has drawn his ideas from

The groups Kreeft, Colson and Neuhaus had in mind to "bring together" were alienated Evangelicals, Orthodox Jews and conservative Roman Catholics, wallowing in their sense of victimhood, to which Kreeft added Muslims. Of course the ultra-conservative Kreeft and extremist Neuhaus were against contraception and equated it with abortion. Thus the logic of their argument was that of my fathers' too: the United States Government was enabling murder, was disparaged as a "regime" that needed to be overthrown.

To the extent that Santorum and the rest of the Republican field this year have alienated most Americans we can thank the "intellectual" enablers of off-the-wall right wing radicalism. Just how crazy are these people? How radical are they?

To plumb the depths of the tortured "reasoning" behind the Roman Catholic Bishop's anti-contraception movement, consider the writing of Roman Catholic philosopher Elizabeth Anscombe. She's a heroine to today's leading conservative Roman Catholics including to Cardinal Dolan (who is close to Robert George and Colson) and the Vatican. She wrote passionately in defense of the papal prohibition of contraception: . . . intercourse within marriage is a graver offence against chastity than is straightforward fornication or adultery."

And now with Romney (the fake) Santorum (the true believer) and Gingrich (the inscrutably weird) doing all but quoting these religious leaders openly and verbatim, and with the ultra-conservative Roman Catholic bishops parroting their mentor Robert George in anti-Obama rhetoric and with Romney having to pretend that he agrees... the Republican Party is now firmly in the hands of people like George who believe that a madwoman like Anscombe was brave and right to describe contraception as: "contraceptive intercourse within marriage is a graver offence against chastity than is straightforward fornication or adultery." And George and Colson and company are still at it trying to keep the myth alive that President Obama is anti-religion.

Yes, what Schaeffer describes is insane and bizarre, but that is the true face of today's Republican Party and its Christianist/Tea Party base. We are not talking about normal or sane people.