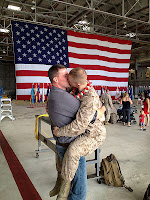 While many have applauded the photo of Marine Sgt. Brandon Morgan kissing his partner Dalan Wells upon Morgan's return from a deployment to Afghanistan, the knuckle dragging Neanderthals and Bible beating Christofascists in Hampton Roads reacting to a story in the Virginian Pilot have demonstrated why the region remains a cultural and economic backwater that is non-appealing to progressive and innovative businesses. From the comments, it's obvious that many of those leaving homophobic comments (i) want special rights from far right Christianists and (ii) hold open hostility to some of the concepts enshrined in the nation's founding documents. Concepts such as this one:

"We hold these truths to be self-evident, that all men are created equal, that they are endowed by their Creator with certain unalienable Rights, that among these are Life, Liberty and the pursuit of Happiness."

Thankfully, the majority of the comments are supportive of Morgan and Wells, so perhaps there's hope for the region as the nasty bigots die off. Here's a sampling of the mindset that shows that Hampton Roads is still a bigoted backwater:

I cant wait until we see the serviceman kissing his sheep or blow up doll on the pier without discrimination.

Yep, these are the same folks who probably voted for members of the Virginia GOP who support invasive vaginal ultrasounds for women, want to buy unlimited numbers of guns, and view women as chattel. They probably go to church on Sundays too and congratulate themselves on their godliness. Here are highlights from the story that prompted the homophobic batshitery:

[L]ast weekend a friend posted a photo of their embrace on the Gay Marines page on Facebook. Morgan, in desert camouflage, is seen wrapping his legs around Dalan Wells' legs. A large American flag, draped floor to ceiling inside an aircraft hangar at a Marine base in Hawaii, is in the background.

Photos of exuberant servicemen and homecomings aren't new. But this one, taken some five months after the repeal of the military's "don't ask, don't tell" policy prohibiting gay servicemen from openly acknowledging their sexuality, is among the first showing a gay active duty serviceman in uniform kissing his partner at a homecoming.

More than 40,000 people have clicked the "like" button for the photo on Facebook, and thousands have shared it with their friends on several social media sites. Journalists are inundating Morgan with interview requests, and supporters from as far away as Italy are flooding his inbox with messages of thanks and encouragement.

Many of the more than 10,000 comments on the Gay Marine page's posting of the photo page celebrated the image. Luis Perez wrote "Best to you and your loved ones. You inspire so many people with your bravery, including this wonderful homecoming."

Few disparaged Morgan for kissing a man. The critical comments generally questioned the appropriateness of a Marine in uniform wrapping his legs around a partner.

Feedback from fellow Marines has been positive too, Morgan said, though he has some regret for jumping on Wells. He called that "excess amount of public display of affection." His superiors have talked to him about it, he said, and he agrees he went a little too far. The Marines have rules, even at homecomings, Morgan said.

Meanwhile, via the Seattle Post-Intelligencer here's a photo from the homecoming of the aircraft carrier USS Stennis on Friday, March 2, 2012 in Bremerton, Washington, as the USS Stennis returned to home port after a seven-month deployment in which the aircraft carrier launched the last Navy air mission over Iraq and more than 1,000 flights over Afghanistan. 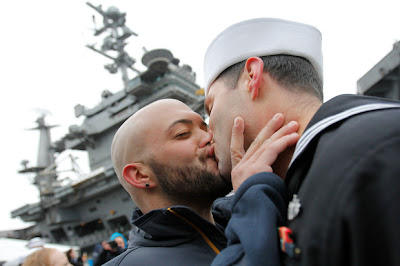 The Neanderthals need to crawl back into their caves and under the rocks where they belong. Like it or not, the world and society are moving on.
Posted by Michael-in-Norfolk at Saturday, March 03, 2012