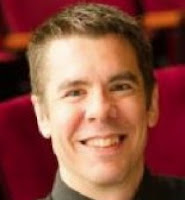 We saw recently how the leadership Roman Catholic Church talks out of both sides of its mouth while claiming to require that gays be treated with compassion and respect even as gays are publicly humiliated such as the lesbian who saw the presiding priest walk out on her mother's funeral. Yet another example of the disingenuous blather and hypocrisy from the enablers and protectors of child rapists comes to us from St. Louis, Missouri, where a teacher (pictured at right) at a Catholic school has been fired upon the hierarchy's discovery that he was planning to marry his partner of 20 years in New York. Covering up for the rape of children and youth is perfectly fine with the "princes of the church" but a loving and committed relationship is grounds for firing. Talk about f*cked up priorities not to mention hypocrisy. Here are highlights from the St. Louis Post-Dispatch:

A popular music teacher at St. Ann Catholic School in north St. Louis County recently was fired after church officials learned that he planned to marry his male partner of 20 years in New York, one of a handful of states where same-sex marriage is legal.

The teacher, Al Fischer, confirmed to the Post-Dispatch that he was fired Feb. 17 from his job of four years at the school. When asked to comment on his firing, Fischer declined and referred to a letter emailed to his students' parents shortly after his termination.

In the letter, Fischer tells parents of "my joyful news, and my sad news" — the former being his plans to marry his longtime partner in New York City, and the latter, "that I can't be your music teacher anymore."

Fischer's partner, Charlie Robin, executive director of Washington University's Edison Theatre, told the Post-Dispatch that the couple's relationship was in no way a secret at St. Ann and that Fischer was fired after a representative of the St. Louis Archdiocese overheard him talking to co-workers about his wedding plans.

The Rev. Bill Kempf, St. Ann's pastor, said in an emailed statement that the parish was "recently informed by one of its teachers of his plan to unite in marriage with an individual of the same sex. With full respect of this individual's basic human dignity, this same-sex union opposes Roman Catholic teaching as it cannot realize the full potential a marital relationship is meant to express. As a violation of the Christian Witness Statement that all Catholic educators in the Archdiocese of St. Louis are obliged to uphold, we relieved this teacher of his duties."

The Christian Witness Statement, which educators sign when applying for Archdiocese work, says all who serve in Catholic education should, among other requirements, "not take a public position contrary to the Catholic Church" and "demonstrate a public life consistent with the teachings of the Catholic Church."

One parent at St. Ann Catholic School who asked not to be identified said many parents were upset over Fischer's firing, considering his impressive work with the school's music program and his popularity among students and parents. The parent and others with ties to the school told the Post-Dispatch that Fischer's sexual orientation was well-known.

Frankly, were I to walk into a Catholic Church, I'd feel dirty by mere physical association with an institution that has made the molestation a worldwide scourge and which has made lying and cover ups of crimes against children and youth a near art form. One does get much more depraved that aiding and abetting the molestation of children and working to shield the child rapists from justice. The Catholic hierarchy makes the most tawdry whore look virtuous.

I agree, but why would gays work for catholic schools, anyway? Or, for that matter, go to catholic adoption agencies? It's like going in a vegan restaurant and demanding a steak.