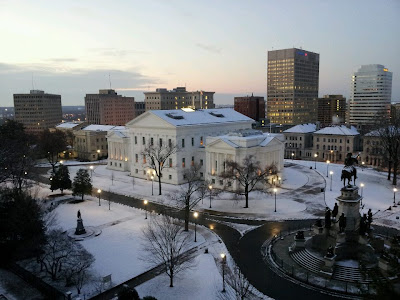 While a great deal of horrible legislation has been passed by the Virginia GOP controlled Virginia General Assembly this session, it could have been far worse but for a few of the increasingly rare moderate Republicans in the Virginia GOP. Of course, friends in the Democratic Party such as Janet Howell also played very important roles. One such moderate is Senator Frank Wagner who I first got to know years ago as an advocate for strong public education in Virginia Beach. Now, some of these moderates will likely have to face the wrath of the extremists at The Family Foundation and their network of religious zealots across the state. The Washington Post looks at the behind the scene goings on and the grumbling from the Kool-Aid drinking set. Here are some highlights:

After early success, Virginia conservatives have seen some of their highest priorities thwarted in the General Assembly. Several marquee bills related to home-schooling and welfare, abortion and illegal immigration were killed or gutted in the past two weeks at the hands of four moderate Senate Republicans, including Majority Leader Thomas K. Norment Jr. (James City).

That has frustrated and even angered some conservative lawmakers and activists, the core of the Virginia Republican Party.

“The base out there is looking at this, and they were told for years that it’s the Democrats holding things up,” said Del. Robert G. Marshall (R-Prince William). “We hold an election, we take charge and guess what? It’s the Republicans holding things up. This is not good news for the conservatives around Virginia at all.”

Four longtime moderate Republicans — Norment and Sens. Harry B. Blevins of Chesapeake, Frank W. Wagner of Virginia Beach and John C. Watkins of Powhatan — were behind many of the defeats.

More than Southern civility was at stake. If conservatives pushed too hard too quickly, they could turn off swing voters in this year’s presidential and U.S. Senate races, political observers have said. Nor would it do much for McDonnell’s national political ambitions, because signing a host of divisive bills might make him a liability with moderate voters.

But with Republicans controlling every lever of power for the second time since the Civil War, some conservatives saw no reason to wait. . . . They had some wins . . . They overturned a 19-year-old law limiting handgun purchases to one per month; passed a bill allowing faith-based adoption agencies to turn away, for religious reasons, gay applicants; and approved a $10 million-a-year tax credit for a private school vouchers for poor and middle-class students. And then the conservative revolution seemed to hit a wall . . . .

Moderate Republicans helped kill measures that would have allowed home-schooled children to play public school sports; subjected welfare recipients to drug testing; defined a fertilized egg as a person; denied state-funded abortions to poor women with grossly deformed fetuses; and freed schoolgirls from a mandate to get immunized against a sexually transmitted virus linked to cervical cancer.

The tide seemed to turn about the midway point in the session, as comedians and commentators on national television fanned an uproar over a bill requiring that women have an ultrasound involving a vaginal probe before getting an abortion.

[S]ome conservative activists see the defeats as nothing short of a betrayal. Some said they saw this coming, having vowed at the start of the session to keep an eye on suspected moderates. But others’ expectations for the session have been dashed.

“You had a lot of people that had their hopes up,” said Mark Kevin Lloyd, chairman of the Virginia Federation of Tea Party Patriots. “They thought by putting more conservatives in office, it would give the rest of them a spine. It hasn’t happened yet — to the satisfaction of many.”