Maine Catholic Diocese Will Not Publicly Campaign Against Gay Marriage 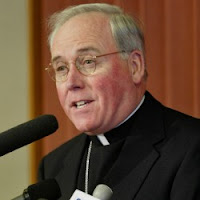 In 2009 the Roman Catholic Church actively and very publicly campaigned to overturn Maine's same sex marriage law. Now that a repeal of the repeal of the marriage aw will be on the ballot in November, the head of Maine's Catholic Diocese claims that the Church will not be actively campaigning against same sex marriage. Of course, that's not to say lots of money will not be secretly routed via the Knights of Columbus or the National Organization for Marriage which seems in many ways to be a front organization for the Catholic Church - and possibly the Mormon Church. Frankly, I believe the truthfulness of anything a Catholic bishop about as far as I could throw an aircraft carrier. Thus, it will be telling to see whether this claim holds up. Obviously, with the worldwide sex abuse scandal still in full swing, the Church has better things it could be focusing its efforts on besides persecuting loving, committed same sex couples. Here are highlights from the Morning Sentinel:

The Roman Catholic Diocese of Maine will take no active role in a political campaign against a same-sex marriage referendum that's expected to be on the November ballot, Bishop Richard Malone announced today. Instead, the diocese is expanding an existing educational program to better inform church members about the qualities and benefits of marriage between one man and one woman.

Malone issued a pastoral letter on marriage today that will be used extensively to teach 185,000 Roman Catholics in Maine about the gift of traditional marriage and the need to preserve it as it is.

The largely in-house educational initiative represents a significant departure from the major role that the diocese played in supporting a successful 2009 referendum against gay marriage. The diocese contributed more than $500,000 to that $3.8 million campaign and its public affairs director took a leave of absence to lead the effort.

This time, Malone said, the diocese won't be taking up special collections, buying TV ads or contributing staff to a political campaign against same-sex marriage.

Last month, same-sex marriage advocates in Maine turned in more than enough signatures to put a gay-marriage question on the November ballot. First, the question will be considered by a Republican-controlled Legislature and Republican governor. If both approve the measure, then same-sex marriage would become legal. If either rejects the measure, which is expected, the state will hold a referendum.

Opponents of gay marriage are poised to file paperwork with the Secretary of State next week, establishing a political action committee or a ballot question committee that will be called Protect Marriage Maine, said Carroll Conley Jr., executive director of the Christian Civic League of Maine.

Personally, I look forward to the day when Christians are a minority and their rights can be put to referendums. It would certainly be a fitting pay back for all the misery and heartache they have inflicted on society and the world.
Posted by Michael-in-Norfolk at Saturday, March 03, 2012