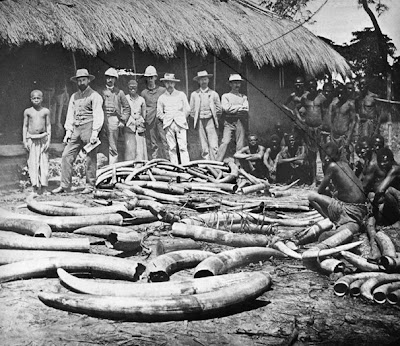 Back in October I wrote in a VEER Magazine column about information reported by the New York Times in a book review of “The Origins of AIDS,” published by Cambridge University Press, and written by Dr. Jacques Pépin, an infectious disease specialist at the University of Sherbrooke in Quebec. The piece suggested that there were a number of factors involved - including prostitution and unsanitary medical conditions - in the unlikely spread of a rare virus. The piece also made it clear that Belgian and French colonial policies also played a role as did corrupt and unsanitary procedures in a Hatian plasma center that exported plasma to the USA.. Now, a new article in the Washington Post places even more blame on colonial policies and the population upheavals that colonial trade triggered. Here are some highlights:

We are unlikely to ever know all the details of the birth of the AIDS epidemic. But a series of recent genetic discoveries have shed new light on it, starting with the moment when a connection from chimp to human changed the course of history.

We now know where the epidemic began: a small patch of dense forest in southeastern Cameroon. We know when: within a couple of decades on either side of 1900. We have a good idea of how: A hunter caught an infected chimpanzee for food, allowing the virus to pass from the chimp’s blood into the hunter’s body, probably through a cut during butchering.

For decades nobody knew the reasons behind the birth of the AIDS epidemic. But it is now clear that the epidemic’s birth and crucial early growth happened during Africa’s colonial era, amid massive intrusion of new people and technology into a land where ancient ways still prevailed. European powers engaged in a feverish race for wealth and glory blazed routes up muddy rivers and into dense forests that had been traveled only sporadically by humans before.

The most disruptive of these intruders were thousands of African porters. Forced into service by European colonial powers, they cut paths through the exact area that researchers have now identified as the birthplace of the AIDS epidemic. It was here, in a single moment of transmission from chimp to human, that a strain of virus called HIV-1 group M first appeared.

In the century since, it has been responsible for 99 percent of all of the world’s deaths from AIDS — not just in Africa but in Moscow, Bangkok, Rio de Janeiro, San Francisco, New York, Washington.

Once the virus made the jump from chimp to human, a single infected person could have carried HIV down the Sangha, onto the Congo River and into Kinshasa. The Belgians had founded the city in 1881, during what historians call “The Scramble for Africa,” when colonial powers carved up the continent into areas of influence. By the early 20th century Kinshasa, then called Leopoldville, was the biggest city in Central Africa, fueled by the dizzying growth of trade with the outside world.

[A]s scientists plotted out the genetic histories of these varieties and built an extensive family tree for HIV, they all appeared to have spread from a single explosion, a big bang of the AIDS epidemic: Ground Zero was Kinshasa.

The only obstacle to European companies’ reaping huge profits was that collecting ivory and rubber required massive amounts of labor. . . . . The solution to the manpower demands soon became obvious. Colonial powers created what was essentially slavery: cheap muscle at the point of a gun. . . . . That meant African porters had to carry goods and supplies anyplace the steamboats couldn’t reach.

All these roles were filled by Africans, many imported from villages hundreds or even thousands of miles away. African life here was beyond cheap. It was disposable. Contemporary accounts by journalists and missionaries tell of colonial officials across the Congo Basin ordering mass slaughters and the torching of restive villages while creating forced settlements that resembled nothing so much as concentration camps.

Ominously, something else followed the rubber trade through Cameroon: disease. Sleeping sickness, smallpox and skin infections were the most obvious. . . . . Colonial authorities attempted mass inoculation campaigns for smallpox and set up quarantine zones that restricted where the porters were allowed to travel. But even so, the diseases spread.

[I]t’s clear that colonial commerce created massive new networks of sexual interactions — and massive new transmissions of infections. (In later decades, transmission through the reuse of hypodermic needles in medical care probably had some role in HIV’s spread as well.)

To fulfill its grim destiny, HIV needed a kind of place never before seen in Central Africa but one that now was rising in the heart of the region: a big, thriving, hectic place jammed with people and energy, where old rules were cast aside amid the tumult of new commerce. It needed Kinshasa. It was here, hundreds of miles downriver from Cameroon, that HIV began to grow beyond a mere outbreak. It was here that AIDS grew into an epidemic.

So the improbable journey of the killer strain of HIV was feasible for only a few hectic decades, from the 1880s to the 1920s. Without “The Scramble for Africa,” it’s hard to see how HIV could have made it out of southeastern Cameroon to eventually kill tens of millions of people. Even a delay might have caused the killer strain of HIV to die a lonely death deep in the forest.

Regardless of the cause identified with the benefit of 20/20 hindsight, it goes without saying that HIV/AIDS has been a tragedy for humanity.

Posted by Michael-in-Norfolk at Tuesday, February 28, 2012