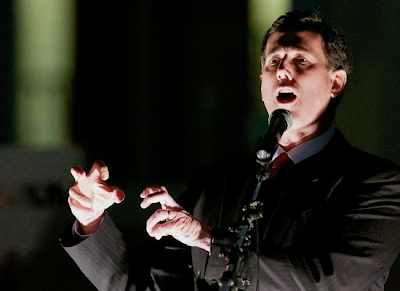 One can only hope that the uproar over Rick Santorum's announced belief that there should be no separation between church and state continues - both so that it (i) helps to end Frothy Mix's political career once and for all and (ii) so that additional media focus will continue to be brought to bear on just how out of step much of the GOP base is with the history of this nation, not to mention objective reality. Today's Washington Post has a main editorial denouncing Santorum and flat out stating that the man is unfit for the presidency. In addition, an o-ed column takes up where the editorial board's column leaves off. First, these highlights from the editorial board piece:

Mr. Kennedy wasn’t telling people of faith to stay out of public life. He was restating the constitutional principle that has helped make America a great and resilient country: No faith should be able to dictate government policy, and government shouldn’t dictate theology to any faith.

The “war” on Catholics that Mr. Santorum imagines stems most recently from President Obama’s proposal, since withdrawn, that Catholic hospitals and universities (though not churches) be required to include contraception in the health insurance plans they buy for their employees.

[D]oes Mr. Santorum really understand the difference between talking about a policy and imposing his views? When he so misreads Mr. Kennedy, when he perceives a war that does not exist, he shows a lack of appreciation for the First Amendment.

That Mr. Santorum believes he has the standing to declaim on the rightness of Mr. Obama’s faith, and whether it is sufficiently Bible-based, is in itself disqualifying.

The op-ed column looks further at Santorum's unfitness and - in my view, the man's extremism, if not mental illness. Here are excerpts:

Mullah Rick has spoken. He wants religion returned to “the public square,” is opposed to contraception, premarital sex and abortion under any circumstances, wants children educated in what amounts to little red schoolhouses and called President Obama a “snob” for extolling college or some other kind of post-high school education. This is not a political platform. It’s a fatwa.

Santorum is severe and unamusing about his faith, and that is his prerogative. But he has shoved his beliefs in our faces, leaving no doubt that his presidency would be informed by his extremely conservative Catholicism. Santorum’s views are too conservative even for most Catholics.

This is a perilous and divisive approach. We have all of world history to warn us about what happens when religion takes too prominent a role. The public square gets used for beheadings and the like. . . . . layering religion over politics is dangerous. Santorum cannot impose — and should not argue — that his political beliefs come from God. That closes all debate and often infuriates those who differ.

This belief that religion has been banished from public discussion is a conservative trope without foundation. . . . . the American public square is soaked in religion or religion-speak.

Santorum’s views on the place of religion and his quaint ideas about education are so anachronistic they would be laughable. But whenever I start to giggle a bit, I find that some absurd statement resonates with Republican primary voters.

Rick Santorum is not, as some would have it, the Republican Party’s problem. The GOP is half the political equation, and so its inability to offer candidates of sound views and judgments is everyone’s problem. We have to vote for someone after all. But when I mull Santorum’s views on contraception, the role of women, the proper place for religion and what he thinks about education, I think he’s either running for president of the wrong country or marooned in the wrong century. The man is lost.

As I have noted before, Santorum's hysterical need for religious certainty and a desire to stomp out any differing views is frightening. The man and his supporters literally want a world where all uncertainty and any requirement that people use their intellect has been banished from existence. It is, in my view, indicative of individuals who have extreme mental health issues - and who are a treat to constitutional government as we have known it.
Posted by Michael-in-Norfolk at Tuesday, February 28, 2012

I have noted in my own blog this morning that Michael and I couldn't be more different in our politics; but we often agree in principle.

In the case of Rick Santorum, we agree in principle and we agree as to how we see the facts that surround the man and his opinions.

I don't know which is more dangerous to this country, Mr. Santorum or the thoughtless, constitutionally ignorant rabble who support him. Mr. Santorum will more than likely go away. The rabble behind him will not so easily be dismissed, so I'm afraid they are the supremely dangerous entity which threatens the very constitution of this great country.

See my blog on Mr. Santorum at http://jackscottsbisexualbuddies.blogspot.com/2012/02/when-politics-becomes-dangerous.html