I've written a number of times that Bob "Taliban Bob" McDonnell, Virginia's current governor and V.P. nominee want to be, may have cut his own throat by slavishly supporting the extremist, theocracy supporting agenda of The Family Foundation and Virginia GOP lunatics like Del. Bob Marshall who seems to hate all gays and women with equal vigor. While the image immediately below comes from Oklahoma where GOP extremists are pushing measures akin to what the culture wars obsessed Virginia GOP has sought to inflict on all Virginians, it sums up what many women are feeling in Virginia and will hopefully remember when they are in voting booths in November, 2012, and November 2013: 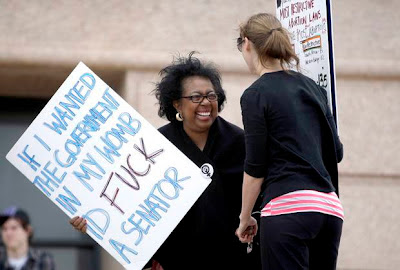 A column in the Washington Post looks at Taliban Bob's self-inflicted damages and pretty much mirrors my analysis and that of my former undergraduate classmate, Larry Sabato, which I noted in a previous post. Here are some column highlights:

When Virginia Gov. Robert F. McDonnell (R) asked antiabortion zealots in the General Assembly last week to soften the controversial ultrasound bill, he faced a dilemma in explaining his move: Shall I appear ill-informed or weak-willed?

McDonnell chose the former. He says he just didn’t realize the measure he had been broadly supporting would require many women desiring to end a pregnancy to undergo a particularly invasive ultrasound in which a probe is inserted in the vagina.

Because of McDonnell’s intervention, the bill soon headed for his signature would require only an abdominal ultrasound, performed outside the belly. That’s still an outrageous violation of women’s rights, for abortion defenders (like me). But abortion opponents view it as a disappointing compromise.

I’m skeptical that the governor’s explanation is the whole story. I agree with the hard-core social conservatives who said he had “suddenly gone squishy,” as one blogger wrote, when faced with an outpouring of opposition. That included having the law (and by extension, the state) become a punch line for late-night comedians.

Unfortunately for McDonnell, the nuances of his position drowned quickly in the raging ideological whirlpool that is abortion politics, particularly at the national level. It doesn’t matter to the Democratic Party — much less MSNBC commentators or “Saturday Night Live” satirists — that McDonnell repeatedly urged GOP legislators not to “overreach” on social issues.

As a result of the uproar, he has probably sacrificed whatever chance he had of being picked as the GOP vice presidential nominee this year, said a wide range of political analysts, including Republicans sympathetic to the governor.

Assuming that the Republican presidential candidate is Mitt Romney, it would be much harder for him now to tap McDonnell as a running mate. The two of them would immediately have to devote time to defending the ultrasound bill, in addition to McDonnell’s controversial 1989 master’s thesis saying, among other things, that working mothers hurt families.

“I think the moment in the sun is over,” said a Republican source, who spoke on condition of anonymity to speak candidly about the governor’s prospects. The ultrasound controversy “was probably very unhelpful to the calculus that Romney will make at the convention. Together with the thesis, this creates a second object of ridicule,” the source said.

McDonnell didn’t help his own cause when he signed a bill to repeal a longtime law limiting firearms buyers to one handgun a month— which he supported when it originally passed.

If Democrats win Virginia in November as a result, with both the White House and U.S. Senate in play, the Republicans might wish they had better heeded McDonnell’s counsel.

As noted in prior posts, Bob McDonnell needs to talk to Virginians outside The Family Foundation/Christofascist bubble and if he refuses to do so, he does so at his own peril. And on a personal level, it's not the first time that McDonnell has refused my advice and learned the hard way that I may be gay, but I'm not stupid or lacking in political sense. What am I talking about? Several things, but the most memorable is when I told McDonnell - actually the entire Virginia GOP delegation to the Virginia General Assembly - that they had a problem in the form of former Congressman Ed Schrock and that if the Virginia GOP anti-gay agenda did not cease, Schrock was going down. Did Taliban Bob listen? Of course not, and ultimately Mike Rogers outed Schrock with some help from yours truly.

I don't wish McDonnell ill, but he has made a pact with the Christianist devils and needs to pay the price for his betrayal of concepts such as freedom of religion for all citizens. If McDonnell wants to repent, he can start by firing Victoria Cobb's husband from his cushy state government job, veto the anti-gay adoption bill, and start looking after the interest of Virginians who don't imbibe Christianist Kool-Aid by the gallon full. Will he do it? I doubt it and it could be why he may never get the VP nomination.
Posted by Michael-in-Norfolk at Thursday, March 01, 2012