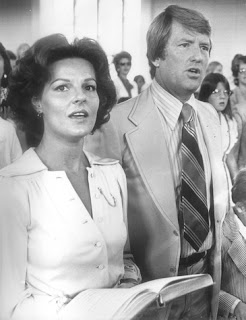 It's not nice to judge the dead, but the story in the Washington Post reporting the death of Bob Green, Anita Bryant's first husband (they are pictured together at right) and co-leader in efforts to repeal pro-gay legislation in the late 1970's, might be a cautionary tale for both today's self-congratulatory professional Christian set and hubris filled GOP candidates. Extremism can backfire and denigrating the humanity of others often doesn't leave one well thought of over time and in the long view of of history. One cannot help but wonder how different both Green's and Bryant's lives would have been had they been willing to leave others free to live their lives and follow their own religious journeys. Ironically, Green blamed gays for the maladies in his life rather than looking taking a good look in the mirror. Rick Santorum, are you listening? Here are some story highlights:

Bob Green, a onetime radio DJ who married pop singer and Miss Oklahoma Anita Bryant, was found dead Jan. 26 at his home in Miami Beach. He was 80. Mr. Green managed his wife’s rise to stardom as an entertainer and Florida citrus spokeswoman, then followed her into anti-gay activism, which ultimately destroyed their careers — and marriage in 1980. For more than 30 years, Mr. Green lived quietly, alone and resentful.

In 1977, Mr. Green and Bryant led a successful effort to repeal Miami -Dade County’s newly passed gay rights ordinance, Bryant out front and the tall, handsome Green behind the scenes, as he had been when he managed her singing career.

“He would maintain publicly that he was perfectly happy being Mr. Anita Bryant and making arrangements backstage instead of being the one in the limelight,” said Robert Jr. “She was the one who was visible. And getting all the credit for something they really created as a team. Maybe there was some kind of subconscious resentment.”

The family’s pastor persuaded Bryant to launch the successful anti-gay-rights campaign, Mr. Green told the Miami Herald in 2007. Flush with victory in Miami-Dade, the couple founded Anita Bryant Ministries, which offered “deprogramming” and halfway houses for gays and a lecture series called “Design for Successful Living,” aimed at battling divorce. But Bryant’s campaign against the ordinance tanked her image. She lost her orange-juice gig, convention bookings and big-ticket income.

In 1980, she filed for divorce, a scandal in the Christian circles where she’d been revered. . . . In 2007, Mr. Green told the Miami Herald that he blamed gay people for the turmoil in his life because “their stated goal was to put [Bryant] out of business and destroy her career. And that’s what they did. It’s unfair.”

After the divorce, they sold the place for $790,000 and split the proceeds in 1982. Once millionaires, they’d lost most of their fortune. “I jog past the house and I say, ‘I wish I was back there in the good old days,’ ” Mr. Green said in the 2007 interview. “I used to jog on North Bay Road and cry all the way. I don’t have any friends.

Does such a fate await Maggie Gallagher and similar hate merchants? Only time will tell.