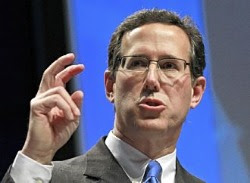 Sometimes I feel as if I discuss religion more than any topic on this blog, but the reasons are fairly obvious. First it's because religion is the driving force behind the persecution of and discrimination against LGBT individuals. Second, it's because today's Republican Party has become basically a religious party which is obsessed with forcing its members' religious beliefs on the entire country. Unfortunately, in their quest to impose their religious beliefs on all members of society, the Christianists and their minions in the Republican Party have turned the principles of the Founding Fathers upside down and have seek to instead impose the rigid theocracy mindset brought to North America by the Puritans in the Massachusetts colony. A column in the New York Times looks at this phenomenon and reminds us of the concept of freedom of religion championed by Roger Williams - founder of Rhode Island - that was adopted by the Founders. Here are some highlights:

“Rick Santorum is John Winthrop,” the historian and author John M. Barry was saying the other day. Barry is in a unique position to make such a judgment. His most recent book, published last month, is entitled “Roger Williams and the Creation of the American Soul.” To call it a biography sells it short. What it is, really, is the history of an idea — an idea that Williams articulated before anyone else — about the critical importance of separating church from state.

So revolutionary was this idea that it caused Williams to be banished from Massachusetts and to seek refuge in nearby Rhode Island, which he founded. In doing so, Williams created the first place in the Western world where people could believe in any God they wished — or no God at all — without fear of retribution.

In opposition to that idea, always, were Winthrop and the other Puritans who first came to Massachusetts. Puritans fled to America in the 1600s because they were being persecuted in England for their hard-edged, Calvinist beliefs . . .

Winthrop and the other Puritans did not arrive on the shores of Massachusetts hungering for religious freedom. Rather, Winthrop’s “city on a hill” was meant to be, in Barry’s words, “an authoritative and theocentric state,” no less tolerant of any deviation of Puritan theology than England had been toward the Puritans. Even before Williams’s views about church and state were fully formed, he became an outcast in Massachusetts

In recent decades, the separation of church and state has been more scrupulously followed, thanks to lawsuits and court decisions, many of them controversial. That, in turn, has brought a backlash from social conservatives, who believe that the country has strayed too far from God’s law. Though the separation of church and state may be one of the country’s foundational doctrines, it is, nonetheless, one that many Americans do not readily accept. In the current presidential campaign, Rick Santorum is clearly their standard-bearer.

I don’t doubt that if Winthrop could see America today, he would be horrified — just as, in many ways, Santorum is. Americans are free to do things that Santorum — and Winthrop — would view as deeply sinful. Individuals can believe what they want and act as they wish, without caring about what Rick Santorum — or John Winthrop — thinks.

Unlike Winthrop, if Williams could see the America his central idea gave us, he would likely be pleased. We should all be.

Somehow through their hijacking of the Thanksgiving story - the first was actually at Berkley Plantation here in Virginia - the fact that the Puritans were religious extremists and in many ways not very nice people has been lost to modern generations. They left England to flee persecution but then began to freely persecute others. In many ways, they were the Pharisees of their time. Now, Rick Santorum and the Christianists have replaced the Puritans as the modern day Pharisees of out time. And like the Puritans, Santorum and today's GOP preach directly against the principle of religious freedom written into the Constitution by the Founding Fathers. Indeed, by trying to subvert the U.S. Constitution, one could even argue that it is they, not liberals, who are guilty of treason and seeking to undermine the nation.
Posted by Michael-in-Norfolk at Sunday, February 26, 2012