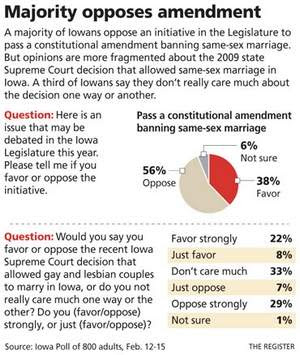 Maggie Gallagher and like minded anti-gay hate merchants like to bloviate that the majority of Americans support the National Organization for Marriage's jihad to outlaw same sex marriage across America. The only problem is that the statements are not true. But when did a Christianist ever let the truth get in the way of their agenda or comply with the Commandment against lying and bearing false witness? A new poll in Iowa shows that a sizable majority of citizens oppose the Christianist/GOP backed effort to negate the Iowa Supreme Court ruling that struck down that state's law banning same sex marriage. Thus, even if the Republicans in the Iowa legislature somehow manage to pass the initiative to put marriage equality on the ballot, Here are highlights from the Des Moines Register on the poll results:

A majority of Iowans oppose passage of a state constitutional amendment banning same-sex marriage, a new Des Moines Register Iowa Poll shows. The poll found that 38 percent favor a legislative initiative to pass a constitutional amendment, while 56 percent are against. Six percent aren’t sure. The findings show little movement on the issue from February 2011, when 40 percent of those surveyed supported passing an amendment, while 54 percent were opposed.

Age makes a difference, although support for a constitutional ban fails to reach a majority in any age group. Thirty-four percent of Iowans under 35 support a ban. Among Iowans 55 and older, the figure rises to 43 percent.

Political affiliation makes a difference, too. Sixty-four percent of Republicans favor a ban, but just 35 percent of independents and 15 percent of Democrats.

The issue has faded somewhat in prominence this legislative session as the proposed constitutional amendment remains roadblocked in the Senate.

The proposed amendment, which would authorize a statewide referendum, was approved in the Republican-controlled Iowa House last year. But Democratic leader Michael Gronstal has blocked it from consideration in the Senate. The issue must be passed by two successive General Assemblies to be placed on the ballot.

With older bigoted voters literally dying off, time is on the side of marriage equality and, hopefully, members of the GOP will come to realize that anti-gay bigotry is a losing issue. Of course, once that day arrives, Maggie Gallagher and similar liars and hate merchants will be out of a job.
Posted by Michael-in-Norfolk at Tuesday, February 28, 2012