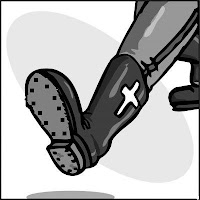 At the risk of raising the ire of some of my Republican readers, I could not pass up commenting on a great op-ed column by Maureen Dowd in the New York Times that looks at the tragedy known as the Republican Party. While some readers label me as a liberal, that's not how I see myself. I'm all for fiscal conservatism provided it's not lip service and focused solely on destroying the social safety net. I do favor Obamacare as the far right likes to call it because overall, I believe it will rein in costs and address the fact that the USA has one of the least cost efficient health care system of any industrialized nation where people without health coverage use emergency rooms for their primary care and countless people go without preventive care only then hit the system with one costly health care crisis after another when they could have been avoided in many instances. But what really gets my blood heated up is the effort of today's GOP to force one set of extreme Christian religious beliefs on all citizens - something in direct conflict with the U. S. Constitution. And as a gay man, I am over having my own government discriminate against me simply because I don't live my life the way Christofascists want me to. I believe that my politics are actually conservative by what that term once meant in this country. That said, here are column highlights:

Rick should scat. Mitt Romney needs to be left alone to limp across the finish line, so he can devote his full time and attention to losing to President Obama. With Sanctorum and Robo-Romney in a race to the bottom, the once ruthless Republican Party seems to have pretty much decided to cave on 2012 and start planning for a post-Obama world. Not even because Obama is so strong; simply because their field is so ridiculously weak and wacky.

In the old days, the Republican ego had control of the party’s id. The id, sometimes described as a galloping horse or crying baby, “the dark, inaccessible part of our personality ... chaos, a cauldron full of seething excitations,” as Freud called it, was whipped up obliquely by candidates. Nixon had his Southern strategy of using race as a wedge, Bush Senior and Lee Atwater used the Willie Horton attack, and W. and Karl Rove conjured the gay marriage bogyman.

Once elected, those presidents curbed the id with the ego, common sense and reason. But now the G.O.P.’s id is unbridled. The horse has thrown the rider; the dark forces are bubbling. Moderates, women, gays, Hispanics and blacks — even the president — are being hunted in this most dangerous game.

In the latest sign that moderate Republicans feel passé, Senator Olympia Snowe of Maine shockingly announced her retirement, decrying “ ‘my way or the highway’ ideologies” and a vanishing political center.

Now Santorum should forfeit his chance after making a far dumber remark: Kids should beware of college because they’ll get brainwashed. . . . Does he think that defining ambition down and asking kids to give up hope is a good mantra? Even Gov. Bob McDonnell of Virginia, who was trying to mandate that women seeking abortions be shamed with vaginal ultrasounds that Democrats dubbed “legal rape,” thought Santorum went too far.

“I don’t believe in an America where the separation of church and state are absolute,” Sanctorum said. If he is willing to cross that line, the only two possibilities are that he doesn’t understand the nature of the United States or that he wants to do damage to the United States. Neither is acceptable.

I certainly agree with Ms. Dowd's conclusions concerning Rick Santorum. She's just nicer than I would be in suggesting he may simply not understand the nature of the United States.

I'd say it's more like his brain has been fried on the fires of right wing nut American Politics and Religion.

I think perhaps, many left wingers, who in some hidden part of their souls really know that President Obama is and will be remembered as a lightweight among the great Presidents of the United States, sincerely hope that he can slide to an undeserved second term as President due to some failing on the part of those who make up the Republican alternatives.

There is no doubt in my mind, even as a lowly and unappreciated moderate Republican that either Mitt Romney or Newt Gingrich could do more to reverse the present plight of the country that can President Obama.

I think there is at least an even chance that those who pay the bills in this country with their tax money will come to feel the same. What the 50% who do not have any money at all invested in the country will feel is much more obvious. We are quickly becoming an entrenched entitlement society in which taking advantage of opportunities for hard work is much less attractive that voting for those who will simply fill our outreached hands. We know who these people will vote for if they find the will to vote at all.

Whether or not Romney or Gingrich get the chance to put this country on a new road to recovery, has nothing whatsoever to do with their personal abilities just as President Obama's personal abilities and qualities of leadership, which are entirely lacking, had anything to do with his election. He had no leadership experience and he has no particular skill which would qualify him to be President of the United States of America at a pivotal point in its history.

With gasoline approaching $5.00 a gallon or more and President Obama blocking realistic measures to offset such burdens on the American people, Ms. Dowd's projections about the 2012 winner could be skewed by that issue alone.

I hope she has a backup story ready for early November, 2012. She may need it!