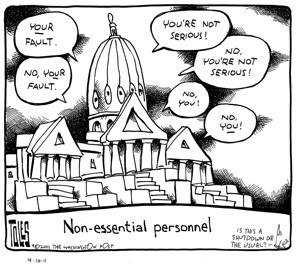 The Republican Party and its Tea Party element are obsessed with making huge budget cuts and at the same time have been obstructing measures to turn the economy around in the hope that economic malaise will help they drive Barack Obama from office in November. While the feigned concern for budget deficits is disingenuous at best given the fact that every foolish spending measure brought forth by Chimperator Bush and his unfunded wars were quickly rubber stamped by the then GOP controlled Congress, nowhere along the way is the human toll ever considered by these ideologues. Now locally some in the Navy are finding out that blind allegiance to the GOP and mindlessly mouthing Rush Limbaugh talking points can carry a heavy price. For every budget cut, real people lose their jobs and real families are impacted - something those of the far right who like to wrap themselves in the cloak of religion fail to understand or, mostly likely, even give a damn about. The Virginian Pilot looks at the fate facing some 3,000 U.S. Navy personnel being forced out through no fault of their own. I'm sure the Kool-Aid drinkers will seek to blame Obama rather than take a good look in the mirror. Here are some story highlights:

The day that Amanda Humburg's husband found out he would be involuntarily discharged from the Navy, his command sent him home early to give him time to absorb the shock. He walked through the door of their house in Chesapeake with a blank expression on his face and a pile of papers in his arms that explained what came next - severance pay, six months of health coverage, free advice on how to write the first resume of his life.

Humburg's husband, who chose not to be interviewed for this story, is one of about 3,000 sailors who will lose their jobs in the coming months as part of an unprecedented and drastic effort to thin the Navy's ranks in overcrowded job fields. It marks the first time the service will lay off thousands of sailors who are in the middle of enlistment contracts, including hundreds in Hampton Roads. In the months since the move was announced, it has become widely unpopular and controversial.

Navy officials contend they had no other choice. Faced with record-high retention because of the economy, the service's usual mechanisms for keeping the ranks in balance have not done enough, said Rear Adm. Anthony Kurta, head of manpower plans for the chief of naval personnel. He said the decision to resort to breaking enlistment contracts was not made lightly, and the method the Navy used to determine who would stay and who would go - panels of senior enlisted sailors and officers dubbed an "enlisted retention board" - was the fairest way to do it. For those selected by the board for discharge, the Navy is doing everything in its power to help them find new employment and successfully transition to civilian life, Kurta said.

Still, he acknowledged several facts that affected sailors and their families say are making the layoffs especially hard to swallow: Many of those being forced out have been in the Navy for well over a decade, and many have good service records. In most cases, they were chosen for discharge based simply on their rank and job classification in order to meet set quotas.

While the Navy's ranks are slowly shrinking - the service now keeps 324,000 active-duty personnel, about 50,000 fewer than a decade ago - officials say the enlisted retention board layoffs are not simply about cutting, and they're not directly driven by larger efforts to reduce military spending. Rather, they are about rebalancing the force.

The Navy explains it this way: Because of the economy, far fewer sailors are leaving the service than in years past. As a result, 31 of the Navy's 85 enlisted fields have become badly overcrowded. For sailors in those job categories, such as aircraft maintenance, that has meant fewer opportunities for promotion, which has swelled the midcareer ranks. While the Navy can compensate to a degree by enlisting fewer new sailors into overmanned fields, it cannot stop altogether; for budgetary reasons and for longer-term force effectiveness, it needs to keep a particular number of sailors in each field and in each pay grade.

The Navy couldn't say exactly how many Hampton Roads-based sailors are being discharged through the enlisted retention board layoffs, but if 1 percent of the service's total force is affected, that amounts to roughly 700 personnel here. It's a number large enough that efforts have sprung up to fight the dismissals, including Facebook pages and a White House petition. At least one sailor is suing over his discharge, according to the publication Navy Times, and even among sailors who haven't been affected, the enlisted retention board has become a source of consternation and anger.

Ward Carroll, the editor of Military.com and a retired naval aviator, said the service's decision to break the enlistment contracts of so many sailors could have wider consequences for recruitment and morale.

I feel badly for those being discharged who have done nothing wrong. The military are now discovering the harsh reality faced by far too many in the private sector. I don't what the solution is, but I do wish that the extremists in the GOP and Tea Party would at least for a moment contemplate that their budget cutting obsession does harm real people and real families.