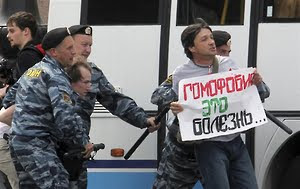 I've long advocated boycotting anti-gay countries (e.g., Jamaica) in terms of both product purchases and blacklisting in terms of travel destinations. It seems that Russia is striving hard to become a pariah because of its treatment of LGBT citizens. I've always wanted to visit Russia and St. Petersburg, but that's not going to happen now and I hope many others will scorn Russia and spend their tourism dollar elsewhere. At the same time, I cannot help but note the parallels with the anti-gay atmosphere in parts of Africa where government incompetence and corruption always seem to go hand in hand with launching homophobic campaigns, apparently in the hope that the populace will be distracted from the real issues facing their home cities and nation. A video by All Out urging a travel boycott is posted below. Human Rights Watch also looks at the deplorable fines and penalties against individuals or organizations "promoting homosexuality." Here are some highlights:

The St. Petersburg city parliament on February 29, 2012, adopted a bill that would impose fines on people engaging in “public activities to promote sodomy, lesbianism, bisexuality and transsexuality” that might be observed by minors. The bill passed by a vote of 29 to 5 with one abstention. The governor has two weeks to veto the bill or sign it into law.

“February 29 was a dark day for St. Petersburg and for Russia as this damning anti-gay bill came one step closer to becoming law,” said Hugh Williamson, Europe and Central Asia director at Human Rights Watch.“The governor now has an opportunity to uphold the rule of law and stop this discriminatory and dangerous initiative in Russia’s northern capital.”

The bill’s language is so vague and broad that it could lead to a ban on displaying a rainbow flag or wearing a T-shirt with a gay-friendly logo or even on holding LGBT-themed rallies in the city. The vote in St. Petersburg followed the approval of similar laws in other parts of Russia – in Ryazan in 2006, in Arkhangelsk in September 2011, and in Kostroma in February 2012. Those promoting the bill claim it is aimed at protecting minors from LGBT “propaganda.”

The bill has already caused international outrage. Many nongovernmental organizations and activists have spoken out against it and called on the Russian authorities to stop the bill from being adopted. The US State Department, the UK Foreign Office, the Australian Government, and the European Parliament have also expressed profound concern.

The environment for LGBT people in Russia is very hostile, and LGBT activists are vulnerable to harassment and physical attack. The authorities routinely ban and violently disperse gay demonstrations. In October 2010 the European Court of Human Rights found Russia in violation of freedom of assembly for repeatedly denying activists the right to hold gay pride marches.

It's disgusting and all too typical of sleazy politicians kissing the asses of religious zealots to distract the public from their own corruption and incompetence.