The Tortured and Dysfunctional Lives of Professional "Ex-Gays" 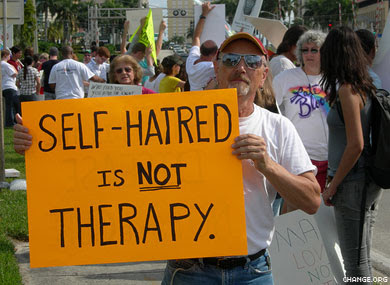 Have you ever noticed that virtually all of the prominent "ex-gays for pay" have a common theme in their pasts? It seems that nearly every one, whether male of female, has a history that includes alcoholism, drug use, prostitution, molestation, screwed up family backgrounds, or all of the foregoing. And rather than take real responsibility for the bad life choices they made, they without exception want to blame their tortured pasts on being gay. In fact, in my view, the biggest problem driving all of the poor choice behavior these "ex-gays" exhibit is the psychological damage they experienced from their religious upbringings. I've often maintained that raising and LGBT child in a far right religious household is a form of child abuse and most "ex-gays" - many of whom have no careers except playing ex-gay for pay - seem to be very damaged individuals as a result of their religious inner self-hate and self-loathing. To listen to these "ex-gays," no one who is LGBT can lead a normal productive life like everyone else in society. Truth be told, most of us do and given their train wreck like past lives, "ex-gays" would seem to be the last people to advise others on any issue. Jeremy Hooper looks at the bizarre lives of the "ex-gays for pay" in a post at Good As You:

n a recent interview with Christian radio host Janet Parshall, professional "ex-gay" Stephen Bennett did that thing the professional "former homosexuals" always do: He linked a whole host of horrible life experiences and choices to his sexuality, as if unrelated feathers are undetachable parts of the gay bird . . .

It's so telling. Virtually to a person, these career "ex-gays" have backgrounds (or supposed backgrounds) of prolonged drug abuse, alcoholism, family strife, molestation, vicious shunning, obsessions with club life, bulimia, and any number of things with which most people truly would need to deal, if they wanted to advance. These "former gays" then link those other elements directly to their sexual orientations, as if it's all in the same bucket. Alan Chambers does it. Charlene Cothran did it. Melissa Fryrear does it. Janet Boynes does it. We never see an "ex-gay" paycheck-earner who just happened to be LGBT with the everyday, up and down life experiences that are most common among the LGBT population. They are always presented as having been addicted, abused, trapped, entrenched, damaged, broken, stuck in horrible relationships, sex-crazed, lacking ambition, immoral (or at best amoral), and generally hurting -- part of a "lifestyle" rather than a life.

I actually think it does more damage to their cause than they realize. Most modern Americans now know an LGBT person or two. Many more see LGBT people in pop culture. A growing number even realize that the negative cultural elements that do greet some LGBT people are largely the byproducts of decades of forced differentiation and stigma, not innate "brokenness."

More and more people know that Stephen Bennett, despite his pretense of firsthand insight, doesn't speak for the LGBT experience, writ large: He speaks for Stephen Bennett, or at least the professionally-crafted version thereof. Oh, and of course he speaks against the entire field of credible science. So there's that, too.