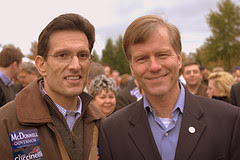 I have noted any number of times that the Republican Party of Virginia - and its Christianist puppet masters - fails to grasp the fact that low taxes are not the only prerequisite to making Virginia a business friendly state and a place that businesses would consider as a possible relocation venue. Key to any business relocation is the ability to (i) retain key personnel and (ii) attract new talent/employees. States and regions that are socially backwards and intolerant of minorities, gays and non-traditional thinking - Southwest Virginia is a prime example - are simply NOT deemed attractive to progressive and innovative companies and businesses no matter how low the tax rate. Now, a number of Virginia businesses have written a letter to Bob "Taliban Bob" McDonnell (pictured above with the ever slimy Eric Cantor) and the members of the General Assembly demanding that he and the Virginia GOP cease their culture war against women, gays and modernity in general. Why? Because it is hurting their businesses. Here are highlights from the letter via Blue Virginia:

As business leaders and employers in Virginia we applaud your successful bi-partisan efforts to keep Virginia first in national rankings as the most business-friendly state.

We urge you to maintain this ranking going forward by ensuring Virginia is a magnet for the best and the brightest employees and entrepreneurs.

Specifically, we urge you to reject extreme proposals governing social issues on which Americans are passionately divided. Otherwise it will be difficult for Virginia to attract and retain the entrepreneurs and talent we need to grow Virginia.

A full list of the signatories of the letter can be viewed at the Blue Virginia link.

This current session of the Virginia General Assembly has made Virginia a national laughing stock and made most Americans likely view Virginia as peopled by Bible beating extremists who want to take the state back to the Middle Ages. One can only hope that Taliban Bob and some of the Virginia GOP Kool-Aid drinkers will open their ears and listen.
Posted by Michael-in-Norfolk at Monday, February 27, 2012