The Christianist Lies in North Carolina 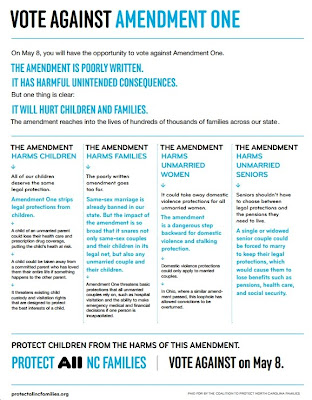 In 2006 Virginia passed the toxic Marshall-Newman Amendment to the Virginia Constitution that wrote religious based discrimination into the state's charter document and bars any state legal recognition whatsoever of same sex couples. While the Marshall-Newman Amendment did much more than merely "protect marriage" the Christofascists at The Family Foundation lied through their teeth and denied that it did anything more than "protect marriage" - once again demonstrating that no one lies more than the "godly Christian" set. Now, in North Carolina we are seeing an exact reprise of the lies and dissemination of knowingly false information as the Christianists seek to enshrine bigotry in the North Carolina Constitution. It is sickening to watch but is part and parcel with the deep sickness that has taken over the far right and the self-congratulatory modern day Pharisee set. The image above lays out the dangers posed by so-called Amendment 1. Pam Spaulding looks at the Christianist anti-gay jihad in North Carolina. Here are some highlights:

There are many anti-family harms that will affect hundreds of thousands of North Carolinians if Amendment One passes on May 8 — it is an atrocity that has nothing to do with “protecting marriage.” It will wreak legal havoc in this state, place families at risk, and no doubt will clog the courts and chase businesses away from North Carolina, already home to many international companies and private institutions that have pro-LGBT policies.

The hurdle in defeating this ballot initiative is NOT whether North Carolinians support some legal recognition of same-sex couples in the state — the polls show 57% do; nearly 80 percent of college-aged voters are opposed to Amendment One. What this amendment does — and those in favor of this discriminatory garbage don’t address this — is that it also bans civil unions and domestic partnerships. The latter exist in several municipalities and counties and would be nullified if Amendment One passes. The problem is educating enough allies/voters about the scope of the harms and getting them to the polls on May 8.

U.S. Senator Kay Hagan announced her opposition to the amendment on Thursday night, specifically speaking to the impact on business and jobs:

I view any attempt to alter our state constitution with a critical eye. Amendment One has far-reaching negative consequences for our families, our children and our communities. North Carolina is one of the most business-friendly states in the nation, and this amendment would harm our state’s ability to recruit the innovators and businesses that are driving our economic recovery. Jobs are my number one priority, and we cannot afford to take our eye off the ball and give businesses a reason to grow and expand elsewhere. The people I hear from everyday - the families that make up the fabric of the Old North State – tell me they are sick and tired of watching their jobs and their livelihoods fall victim to divisive partisan posturing. . . . . Amendment One harms our state’s resolve to make all people and all families great, and as a proud daughter of North Carolina, I urge all North Carolinians to join me in opposing it.

Those who would like to make a financial donation to stop this travesty called Amendment 1 can do so here. For those unable to donate, please make sure that your friends and family members in North Carolina make a point of going to the polls and voting against this hate based amendment.
Posted by Michael-in-Norfolk at Tuesday, February 28, 2012