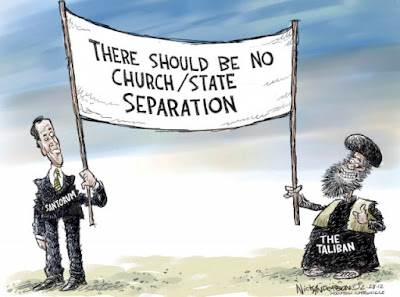 The reactions to Rick Santorum's denunciation of the long recognized constitutional law concept of the separation between church and state noted continue to roll in. As noted in a post earlier today, Santorum and today's GOP are in many ways unrecognizable when compared to the GOP of yesteryear. Fifty years ago my late father was an active Republican in New York State and he would horrified to see what has become of the GOP. I myself was on the city committee for the Virginia Beach Republican Party for eight years (I was even the incorporator for the Virginia Beach GOP) and was precinct captain in a GOP bastion in Virginia Beach. And I am just as horrified as my late father would be to hear Rick Santorum attacking the principle of the separation of church and state. Unfortunately, Santourm, a/k/a Frothy Mix, is the face of what it means to be a Republican in 2012. Andrew Sullivan summed up the situation in a post earlier today. Here are some excerpts that demonstrate the clear and present danger the far right Christianists pose to the nation:

What's fascinating to me about Santorum's outburst yesterday was not its content, but its candor. In fact, one of Santorum's advantages in this race, especially against Romney, is that we can see exactly where he stands. There can be no absolute separation of church and state, let alone a desire to keep it so; and in their necessary interactions, the church must always prevail, or it is a violation of the First Amendment, and an attack on religious freedom. The church's teachings are also, according to theoconservatism, integral to the founding of the United States. . . . America is a special nation because of this unique founding on the Judeo-Christian God. It must therefore always be guided by God's will, and that will is self-evident to anyone, Catholic or Protestant, atheist or Mormon, Jew or Muslim, from natural law.

Hence the notion that America could countenance abortion or same-sex marriage is anathema to Santorum and to theoconservatism. It can only be explained as the work of Satan, so alien is it to the principles of Judeo-Christian America. Hence the resort to constitutional amendments to ban both: total resolutions of these issues for ever must reflect what theocons believe was in the Founders' hearts and minds.

It is a radical theocratically - based attack on modern liberal democracy; and on modernity as a whole. It would conserve nothing. . . . .It is at its essence a neo-Francoite version of America, an America that was not the pinnacle of Enlightenment thought, but an America designed to destroy what the theocons regard as the catastrophe of the Enlightenment.

This [Kennedy's speech] is an explicit public denial that this country is a Christian nation. It is a reaffirmation that "the Government of the United States of America is not, in any sense, founded on the Christian religion." The most important feature of today's GOP - and the fundamental reason I have long abandoned it - stands foursquare against that idea. Moreover, in its fusion of explicit religion and explicit politics, it is itself, in my view, an attack on America - and the possibility of a civil republic. Its religious absolutism is the core underpinning of this country's polarization - because when religion becomes politics, negotiation and compromise become impossible. Bring God into it, and a political conversation must become a culture war.

This is Santorum's fear-laden vision. Which is why he is not a man of questioning, sincere faith and should not be flattered as such. He is a man of the kind of fear that leads to fundamentalist faith, a faith without doubt and in complete subservience to external authority. There is a reason he doesn't want many kids to go to college. I mean: when we already know the truth, why bother to keep seeking it? And if we already know the truth, why are we not enforcing it as a matter of law in a country founded on Christian principles? It is not religious oppression if it is "the way things are supposed to be", by natural law. In fact, a neutral public square, in his mind, is itself religious oppression.

I am relieved he is at least candid. For now we can see in plain view the religious fanaticism that has destroyed one of the major parties in this country, a destruction that is perilous for any workable politics. It must be defeated - and not by electing a plastic liar and panderer like Romney. But by nominating Santorum and defeating him by such a margin that this theo-political Frankenstein, which threatens both genuine faith and civil politics, is dispatched once and for all.

Andrew makes several points I have made as well in many posts on this blog. The only thing he fails to address sufficiently, in my opinion, is the culpability of the GOP elites who for years courted and pandered to the Christianist zealots and hate mongers with no plan as to how to keep the maniacs from taking over the party.
Posted by Michael-in-Norfolk at Monday, February 27, 2012