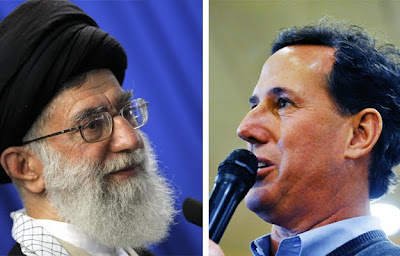 I often refer to American far right Christians as the "Christian Taliban" and with good reason. While they have not resorted to murder and violence - at least yet except in isolated instances - like the Islamic Taliban, the far right Christian elements concentrated mainly in the Republican Party have an avowed goal of forcing all Americans to live their lives under the dictates of the Christian Taliban. Moreover, they have an almost hysterical version to modernity and a secular society.

Give that Rick Santorum, the self-designated high priest of the Christian Taliban, is chaffing at the bit to launch the USA into a war with Iran - apparently he's learned nothing whatsoever from the Chimperator's fool's errand in Iraq or he want s to launch a 21st century version of the Crusades - Foreign Policy has an article that compares Santorum with his opponents in Iran. The comparison is telling and yet more proof as to why far right Christians pose a clear and present danger to America. Here are some article highlights:

One is a religious fanatic railing against secularism, the role of women in the workplace, and the evils of higher education, as he seeks to impose his draconian moral values upon the state. The other is the supreme leader of the Islamic Republic of Iran.

As we move ahead to Super Tuesday -- March 6 -- and what could be the deciding factor in this overlong primary season, Santorum still has one last chance to pull off an upset. If that happens, the former senator from Pennsylvania may finally get his chance to bomb Iran, as he has promised to do.

But before that happens, let us pause for a moment and become a bit more familiar with the dramatis personae who, if given the opportunity, may soon plunge the world into holy war.

It's time to play: Khamenei or Santorum? Who said what?

Can you guess which of the two said the following? No cheating!

1. "We were put on this Earth as creatures of God to have dominion over the Earth."

3. "Although the literal meaning of socialism is equitable distribution of wealth, it is associated with other concepts which we hate. Over time, socialism has come to be associated with certain things in society that are unacceptable to us."

4. "The radical feminists succeeded in undermining the traditional family and convincing women that professional accomplishments are the key to happiness."

7. "Go back and read what the sirens did once you arrived on that island.… They devour you. They destroy you. They consume you."

8. "The American people's hatred for Iran is profound." Oh wait, we got that one backward. Sorry. It should read:

8. "The Iranian people's hatred for America is profound."

So, how did you score?

0 correct: You make me want to throw up.

While the article is written somewhat tongue in cheek, the image of Santorum that is revealed is just about as frightening as that of Khamenei. Both men appear to have major psychological issues and both seek to use religion as a route to power and despotism.