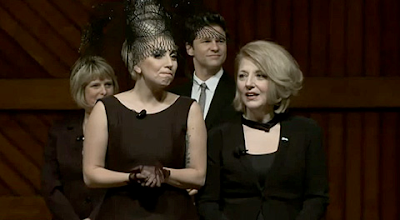 Yesterday at Harvard University Lady Gaga and her mother Cynthia Germanotta launched their Born This Way Foundation. The launch event included a panel with Oprah Winfrey, Deepak Chopra, HHS Secretary Kathleen Sebelius, and Neil Patrick Harris' partner and actor David Burtka. One of the stated goals of the Foundation is to fight bullying - something that will no doubt have the Christianists foaming at the mouth since they want to have free license to denigrate and abuse LGBT individuals and others whom they hate and despise. I applaud Lady Gaga's and her mother's efforts to stop insidious bullying. What's striking is that while the far right malign her endlessly, Lady Gaga practices the true Gospel message of love for others far better than the self-congratulatory, sanctimonious professional Christians and many. many pastors in pulpits. Here are some highlights from the Boston Globe's coverage:

When Lady Gaga stepped on stage at Harvard University’s Sanders Theatre yesterday to launch her youth foundation, it was hardly a typical appearance for the pop star who has built her reputation with over-the-top theatrics.

She didn’t hatch from an egg, or appear in a dress made of raw steaks. Instead the 25-year-old Gaga wore a subdued full-length black dress and spoke to a polite audience of students, academics, and educational specialists about the Born This Way Foundation, a nonprofit charity whose mission is to “foster a more accepting society, where differences are embraced and individuality is celebrated.’’

The official rollout of the foundation was held at Harvard because the university’s Berkman Center for Internet and Society and its Graduate School of Education are offering assistance to the fledgling organization.

Gaga - who was joined by Oprah Winfrey, spiritual leader Deepak Chopra, and Kathleen Sebelius, the US Health and Human Services secretary - is counting on her supersize persona, which has already had a major influence on pop culture, to help encourage and fund the foundation’s programs.

“The goal of the Born This Way Foundation is to challenge meanness and cruelty by inspiring young people to create a support system in their respective communities,’’ she said. “This is about changing . . . the school environment, and not putting the power in the hands of the teachers or the government.’’

The foundation is planning a nationwide bus tour, which it says will teach teens about getting involved in civic groups and allow them to connect with mentors. The “Born Brave Bus’’ will also follow the route of Gaga’s next North American tour.

While yesterday’s Harvard launch was no Lady Gaga concert, hundreds of fans gathered outside in the afternoon snow for a glimpse of the singer.

The star power behind the group immediately makes it one of the nation’s highest-profile efforts against bullying, which has been gaining more attention from education specialists, policy makers, and politicians. Some recent suicides tied to bullying, including the death of Phoebe Prince in South Hadley in 2010, have led to new laws meant to combat such behavior. According to the Berkman Center, 48 states have enacted some form of legislation that requires schools to form bullying policies.

But Gaga said laws won’t make bullying disappear. “There is no federal law that can change these problems,’’ she said. “The only way to solve the problem is to change the environment.’’

In recent years, Gaga has been outspoken on various social and political issues. She campaigned against the military’s now-abandoned “don’t ask, don’t tell’’ policy, which allowed gays and lesbians to serve as long as they hid their sexual orientation. She has also advocated in favor of laws allowing gay marriage.

No matter what message she wants to promote, Gaga can wield an enormous virtual bullhorn to attract attention: She has almost 20 million Twitter followers and 48 million Facebook fans. 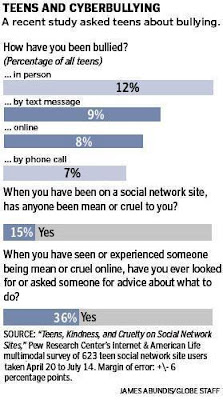