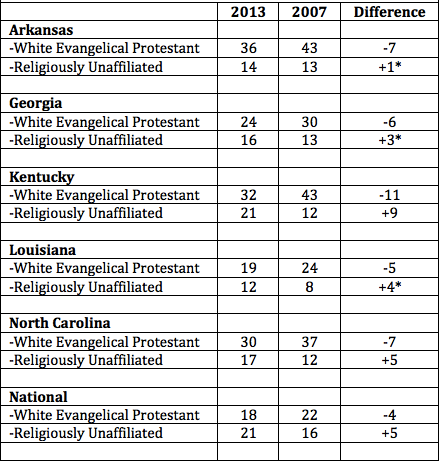 If one looks at a map of the so-called Bible Belt, it more or less correlates with a map of the Old South, regions of lower education and economic levels, and red states.  The poison that has driven the continued ignorance and Republican voting?  Evangelical Christians.  The good news is that as religion wanes in America, especially with the under 30 generations, even Evangelicals are seeing their ranks dwindle.  Overall, this is potential good news for Democrats and those who believe in knowledge and science and, of course, objective reason.  A piece in The Atlantic looks at what this could mean politically.  Here are excerpts:

Midterm elections are all about turning out base constituencies. Over the last few decades, there have been few more reliable voters for Republicans than white evangelical Protestants. This year, however, GOP candidates may be getting less help from this group—not because white evangelical Protestants are becoming less supportive or less motivated, but simply because they are declining as a proportion of the population, even in Southern states.

White evangelical Protestants have remained a steadfast Republican constituency in both presidential and midterm congressional elections ever since the Reagan presidency, which marked what political scientists Merle and Earl Black dubbed “the great white switch.” In 2008 and 2012, roughly three-quarters of white born-again Christians supported GOP nominees John McCain (73 percent) and Mitt Romney (78 percent).  In the 2010 midterm election, similar numbers of white born-again Christians (77 percent) supported the GOP House candidate in their districts.

A look at generational differences demonstrates that this is only the beginnings of a major shift away from a robust white evangelical presence and influence in the country. While white evangelical Protestants constitute roughly three in 10 (29 percent) seniors (age 65 and older), they account for only one in 10 (10 percent) members of the Millennial generation (age 18-29).

[T]he fact that there are currently five Southern states—Arkansas, Georgia, Kentucky, Louisiana, and North Carolina— where polling shows that the Senate race margins are less than five percentage points indicates that 2014 may be the year that the underlying demographic trends finally exert enough force to make themselves felt.

Compared to 2007, just after the 2006 midterm elections, the five southern states where there are tight Senate races have one thing in common: the proportion of white evangelical Protestants has dropped significantly.

Two forces account for the declining proportions of white evangelical and mainline Protestants: the growth of non-black ethnic minorities and, perhaps surprisingly, the growth of the religiously unaffiliated across the South. Notably, each of these growing constituencies leans decidedly toward Democratic candidates.

Lets hope these positive trends continue and that very soon Evangelical Christians can be relegated to the political wilderness where they belong.
Posted by Michael-in-Norfolk at Sunday, October 19, 2014