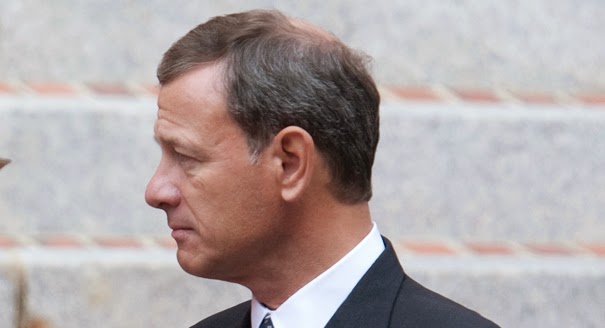 Based on his ruling record to date, Chief Justice John Roberts is anything but a moderate.  But in the conspiracy theorist minds of the far right, especially the Christofascists elements of the right, there is a fear that over time Roberts might - gasp, worry about how history views him - go moderate.  If I were Roberts I would indeed worry that history might lump me with the justices that handed down the Dread Scott decision and other rulings now viewed with horror.  Scalia, the brain dead Thomas, and Alito have no such qualms.  Both perhaps Roberts might, and that has some extremists conservatives troubled.  A piece in Politico looks at their hand wringing. Here are excerpts:

Conservatives, still smarting from what they view as an ideological betrayal by Roberts two years ago in the Supreme Court’s 5-4 Obamacare decision, have looked on suspiciously in recent weeks as the chief justice twice appeared to side with the court’s liberals and Justice Anthony Kennedy against the court’s conservatives.

Taken together, Roberts’ actions seem to be contributing to a kind of buyer’s remorse that could result in even more pressure for ideologically pure nominees.

During his confirmation hearings, Roberts presented himself a strict interpreter of the Constitution and compared a judge’s role to that of an umpire calling balls and strikes. President George W. Bush was so confident in Roberts’ conservative bona fides that he appointed him directly to the post of chief justice.

“I think there are a lot of conservatives who feel like, instead of calling the balls and strikes, he’s kind of ducking when possible,” said Carrie Severino of the conservative Judicial Crisis Network. “There certainly seems like a more consistent pattern on the part of Scalia, Thomas and Alito of being really conservative to the core.”

Morris Davis, a liberal lawyer and former Guantánamo prosecutor, was more blunt in a tweet posted just after the Texas abortion order: “[Chief Justice] Roberts isn’t going to get invited to the tea party this year.”

The abortion and voter ID orders on which Roberts parted ways with his conservative colleagues came just days after the Supreme Court surprised many observers by punting on the issue of gay marriage, rejecting seven petitions asking the court to decide whether the U.S. Constitution guarantees the right of same-sex couples to marry. Since only four justices were needed to take any one of the cases, some suspected that Roberts chose not to accept any of the petitions in order to steer the court away from the contentious social issue.

“It would be in character for Roberts to do this,” Chapman Law School Professor John Eastman said. “I find it hard to believe Thomas, Alito and Scalia wouldn’t vote to take it. … The only thing that makes sense is Roberts didn’t vote to grant certiorari and the other justices were happy to allow this thing to be decided by default.”

This assessment of Roberts troubles conservatives who want to see more ideological stringency and evokes the memory of GOP-appointed justices such as Sandra Day O’Connor and John Paul Stevens, who moved in a more liberal direction over their decades on the court.

If people are concerned that there’s a slow drift to the left, that’s a valid concern, because that’s usually how it happens,” Levey added. “It’s about 50-50 that a Republican judge or justice will remain anything like a Republican.”

Based on his history, I still wouldn't trust this piece of dessicated santorum to be left alone with a teenage girl.