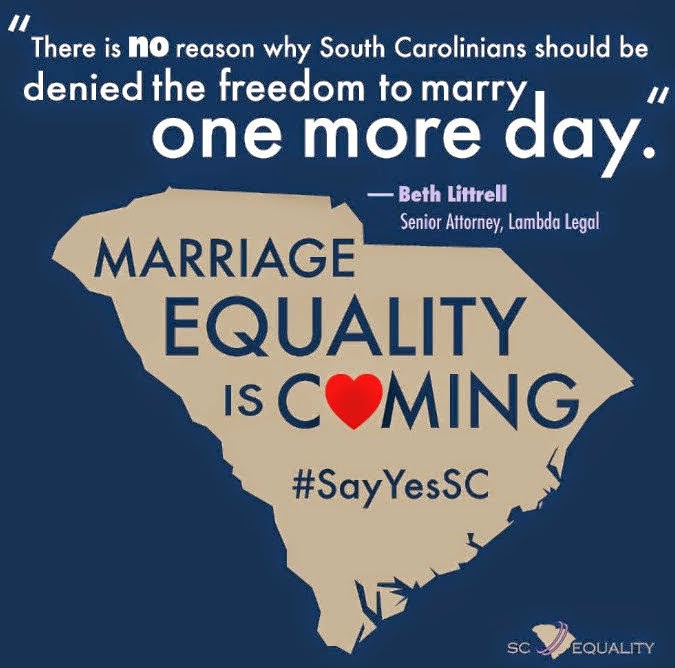 It has been several weeks since the U.S. Court of Appeals for the 4th Circuit's ruling striking down Virginia's bans on same sex marriage was tacitly affirmed by the United States Supreme Court and by extension, the constitutionality of such bans in other states within the 4th Circuit were likewise invalidated.  Of the states within the 4th Circuit, only South Carolina has to date refused to concede that its state sponsored discrimination is headed to the trash heap of history.  This refusal to accept binding precedent may soon come to an end as U.S. District Judge Richard Gergel is poised to possible rule as early as Nov. 3, 2014, in a case filed in Charleston.  The Post and Courier has details.  Here are highlights:

A lawsuit filed by two Charleston women seeking to bring gay marriage to South Carolina will move more quickly after a federal judge on Friday denied an attorney's request for extra time to file responses and after attorneys agreed not to pursue hearings that could have delayed the case.

That means U.S. District Judge Richard Gergel could rule as early as Nov. 3 in a lawsuit filed last week by Charleston County Councilwoman Colleen Condon and her partner, Nichols Bleckley. They contend the state must allow them to marry following the U.S. Supreme Court's Oct. 6 refusal to review an appellate case overturning Virginia's gay marriage ban.

Late Wednesday, Bleckley and Condon requested a temporary injunction prohibiting state officials from enforcing the state's constitutional ban on gay marriage. That would open the state's doors to same-sex marriages.

Gergel denied a verbal request from a state Attorney General lawyer to extend by three days a Nov. 3 deadline to file responses to the couple's injunction request.  "The plaintiff in this case has asserted irreparable injury" due to being denied a marriage license, Gergel said.  "They are entitled to an expeditious review," he added.

If Gergel issues the injunction, it would override the S.C. Supreme Court's stay. "A decision by my court would rule here," Gergel said.

Moving forward, Gergel requested that attorneys address any substantial differences between South Carolina and Virginia laws that they believe could make the Virginia challenge to its same-sex marriage ban - and, in turn, the U.S. Supreme Court's action - inapplicable here.

The U.S. Supreme Court then let that [4th Circuit] ruling stand, which in effect opened the doors to gay marriages in all five states under the appellate court's jurisdiction. South Carolina is the only one of those states still prohibiting gay marriages.

Personally, I would argue that the attorneys representing the sate should face sanctions if they cannot differentiate the South Carolina and Virginia bans - something I doubt can be done.  The sole agenda of the Attorney General's office is to delay and impede the inevitable.
Posted by Michael-in-Norfolk at Saturday, October 25, 2014