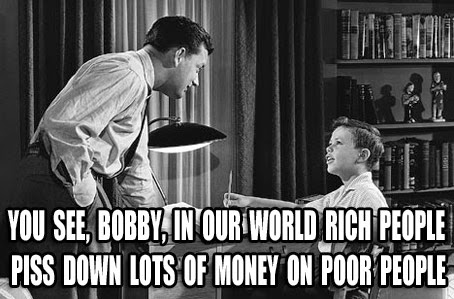 With the spectacle of Kansas' economic meltdown under Sam Brownback and the Kansas GOP's imposition of a GOP dream agenda, one would think that Republicans at the national level might have taken pause to question their 30+ year old policies.  But that, of course, would require acceptance of objective reality and the resolve to stop prostituting oneself to oligarchs and those in the GOP base who are motivated by greed and hatred of others.  With the possibility that the GOP will seize control of the U.S. Senate next month, economists have reviewed GOP economic proposals and found them wanting.  A piece in the New York Times has coverage.  Here are excerpts:

Anticipating a takeover of Congress, Republicans have assembled an economic agenda that reflects their small-government, antiregulation philosophy, but also suggests internal divisions that could hinder a united front against President Obama — much as happened in the 1990s, when a Republican-led Congress confronted President Bill Clinton.


The proposals would mainly benefit energy industries, reduce taxes and regulations for businesses generally, and continue the attack on the Affordable Care Act. It is a mix that leaves many economists, including several conservatives, underwhelmed.

With the prospect of Republicans’ winning control of the Senate and maintaining control of the House in the midterm elections, interest is rising over what they would do to address what polls show is voters’ top concern: economic growth and jobs.

Missing from both Republican lists are two pillars of Mr. Obama’s agenda that many economists consider important for expanding the labor force and promoting long-run growth.
One is significantly higher spending for infrastructure. The International Monetary Fund recently called for such spending, saying it would pay off in broader economic growth.

The other is an overhaul of immigration laws. Despite business pressure to provide a path to citizenship for the millions here illegally, and to admit more foreigners with skills, Republicans’ opposition has only hardened in this campaign.

While most economists and business executives do not look to Congress for much, they do want a rewriting of the corporate tax code and a revamping of fast-growing entitlement benefit programs, even as they ackowledge that is virtually unachievable.

They would be content if Republicans simply “do no harm,” as some put it, by avoiding self-imposed crises like the government shutdown last year that cost $24 billion and further across-the-board spending cuts that have been a drag on the economic recovery and kept pressure on the Federal Reserve to maintain its expansive monetary policy. Congressional Republicans, however, have said they are committed to continuing those spending cuts.

[W]hile the president is not popular, polls show that his economic proposals are, like a higher minimum wage, increased spending for infrastructure and higher taxes on the wealthy.

When Mr. Obama sent Congress his jobs package three years ago, several forecasting firms estimated that it could add up to 150,000 jobs a month in the first year. He challenged Republicans to propose alternatives that could be similarly assessed.

While private sector analysts say that the varied Boehner list is not suitable to their computer models, Joel Prakken, a founder of the St. Louis-based Macroeconomic Advisers, said, “I don’t think you would get a rush of hiring from passing these [GOP] bills.”

As for repealing the health law, “that would create a lot of economic uncertainty, and uncertainty is bad,” Mr. Prakken said.

Posted by Michael-in-Norfolk at Thursday, October 23, 2014