The Toxicity of Internalized Homophobia 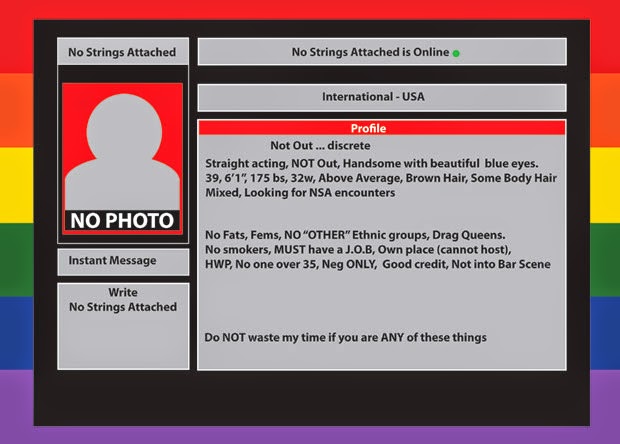 I've written on the topic of internalized homophobia and how it is soul destroying - it took me years of therapy, two failed suicide attempts, and years living out and authentically to get over the poison I had learned growing up - which is just what the Christofascists want.  They care nothing about the lives that are damaged (and sometimes lost to suicide) since their sole agenda is to stamp out anything that calls into question their myth and fairy tale based world view or impedes their ability to feel superior to others.  As LGBT individuals (or as LGBT straight allies), our task is to unlearn the untruths that church, family and society have indoctrinated into us.   If there is a God - something I question often given how evil his self-proclaimed followers are - he/she/it made each us as we are.  A piece in Gay News Network out of Australia looks at the struggle all of us face in letting go of internalized homophobia.  Here are excerpts:

It lurks, often imperceptibly, as an emotional backdrop in the lives of LGBTI people – and for this reason, it often remains unexamined. Unidentified even. It acts as our internal editor, vetting and judging our behaviours and mannerisms and it holds us back from truly loving ourselves for who we are.

I’m talking about internalised phobia. And just like the external variety LGBTI people face from others in the broader community, it can eat away at our self-esteem.

I would venture that there is no such thing as an LGBTI person who has not, at some point, struggled with an internalisation of the negative external judgments of our gender identity or sexual orientation. And it’s an understandable reaction.

From day one we’ve been socially conditioned by a society that privileges heterosexuality and cis-genderism, to the exclusion of all other ways of being. We’ve been sold a narrative by parents, teachers, peers, religious and political leaders and the media, which renders us invisible. And not only does the dominant culture fail to see us, it actively ostracises us.

Now tell me: What 13-year-old has the strength and self-conviction to stand against such a tidal wave of cultural proscription and state: “You’re all wrong, I’m happy just the way I am.”?

This is more often a sentiment that comes a good few years down the track, after considerable personal development. In short, it’s almost impossible for us to avoid our internal self-concept being informed by the external forces of homo/bi/transphobia.

Just like external bigotry, our internalised phobias can manifest in subtle ways: Reluctance to associate with other LGBTI people, feeling disgusted by expressions of same-sex affection or sexuality, disapproval of butch women or femme men, or refusal to show affection with a same-sex partner in public. In the extreme, internalised phobia can lead to self-harm and suicidality.

Working through feelings of internalised judgment with a counsellor who is experienced in such matters can be one way to gradually examine the distorted views of our sexuality or gender, that have been written into our evolving self-concept. In time, and with patience, it is possible for us to rewrite the internal narratives, freeing us to truly be the authors of proud new chapters in our story.

Letting go of  internalized homophobia is very, very hard.  I even know married gay couples who haven't fully let go of it as they avoid socializing with many other gays, especially those not "straight acting."  In the process, of course, they miss out of knowing and coming to love some very wonderful people.
Posted by Michael-in-Norfolk at Saturday, October 25, 2014