Five Extreme GOP Candidates, or Why I'm No Longer a Republican 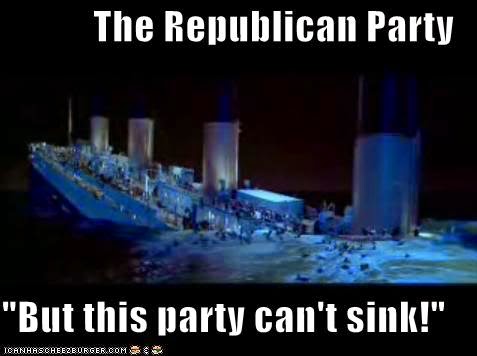 Every year during election season - which here in Virginia means each year given our off year state elections - I catch grief from some former GOP colleagues who harass me for "changing" or becoming a "single issue" voter which is their offhanded way of condemning me for being gay.  The irony, of course, is that I haven't changed and I still support sane rational candidates as my entire family has for generations.   The problem is, it is near impossible to find sane and rational GOP candidates and/or GOP candidates who won't gladly prostitute themselves to the ugly religious extremist and white supremacist elements of the GOP base. Right Wing Watch has a compilation of five GOP congressional candidates who underscore the swamp fever that has overtaken the GOP.  None of these lunatic extremists could have secured the party nomination in the GOP in which I grew up and in which I was active for years.  Here article are highlights:

The conventional wisdom is that so-called establishment Republican candidates by and large triumphed over Tea Party radicals this election cycle. But the truth is that those victories were the result of a party establishment that itself has moved far to the right. Even where Tea Party candidates have failed, the Tea Party movement has increasingly remade the “establishment” GOP in its own image.

It is now core doctrine in the GOP to deny the science behind climate change, endorse sweeping abortion bans and engage in anti-government rhetoric reminiscent of the John Birch Society.
Here, we look at five Republican congressional candidates who could be heading to the Capitol next year. Some have been labeled “establishment,” some “Tea Party,” but all are emblematic of the party’s strong turn to the right.

But in today’s Republican Party, even an “establishment” candidate like Ernst can be just as extreme as a Tea Party insurgent.

Ernst subscribes to the radical, neo-Confederate idea that states can “nullify” federal laws that they deem to be unconstitutional — and even went so far as to suggest that local law enforcement officers can arrest government officials for simply administering federal laws.

In response to a 2012 candidate survey for a group affiliated with former congressman Ron Paul, Ernst pledged to “support legislation to nullify ObamaCare and authorize state and local law enforcement to arrest federal officials attempting to implement the unconstitutional health care scheme known as ObamaCare.”

But Ernst does support government intervention when it comes to women’s reproductive rights, sponsoring the Iowa personhood amendment, which would ban abortion in all cases along with common forms of birth control. “I think the provider should be punished, if there were a personhood amendment,” Ernst said, but has since insisted that she thinks the amendment would be purely symbolic.

Ernst has repeatedly denied the science of climate change, arguing that she has “not seen proven proof” of human influence on the climate and dismissed the role of “man-made activities.”

As Ernst’s candidacy shows, the line dividing “establishment Republicans” from fringe right-wing zealots has become so blurred that it has effectively vanished.

2. Thom Tillis  Like Ernst, North Carolina House Speaker Thom Tillis is widely considered the choice of the “establishment” and “mainstream” wing of the GOP, while his extremist record shows just how far to the right even the party’s “mainstream” has moved.

In 2007, Tillis blasted government policies that “have redistributed trillions of dollars of wealth,” calling them “reparations” for slavery. The same year, he opposed a resolution apologizing for an 1898 massacre of African Americans in a North Carolina city, explaining that the amendment didn’t sufficiently honor white Republicans.

Tillis supported the repeal of North Carolina’s Racial Justice Act — which allowed death-row inmates to appeal their sentences based on evidence of racial bias — and backed heavily restrictive voting laws designed to weaken the black vote.

Tillis has said he would support a Personhood Amendment banning abortion in all cases and prohibiting common forms of birth control, and believes that states have the right to ban contraceptives.

Following a federal court ruling striking down North Carolina’s ban on same-sex marriage, Tillis attempted to preserve the ban by teaming up with the founder of one of the country’s leading anti-gay groups.

While cutting hundreds of millions of dollars from education spending and blocking the expansion of Medicaid under the guise of fiscal stewardship, Tillis shepherded through a massive tax break to benefit top earners and corporations while effectively raising taxes on the lower 80 percent of taxpayers.

3. Jody Hice   Jody Hice entered politics as a Religious Right activist and a conservative talk radio show host, making him part of two worlds that are at the core of the conservative movement. Now, as the frontrunner in an open Georgia House seat, currently held by outgoing far-right Rep. Paul Broun, Hice is set to bring his right-wing agenda to Congress.

Hice made his first foray into politics by trying to convince local governments to erect monuments of the Ten Commandments in public places, which were deemed unconstitutional by, in Hice’s words, “judicial terrorists .” A Christian Nationalist, Hice thinks the founding fathers would support his congressional campaign and has posted on his Facebook page numerous fake quotes from our nation’s founders about the dangers of “Big Government” and the need to mix religion and government.

In one episode of his radio program, Hice suggested that gay people seek therapy, lamenting that “we are enslaving and entrapping potentially hundreds of thousands of individuals in a lifestyle that frankly they are not.” During another radio commentary, Hice denied that legal discrimination towards gays and lesbains exists, before comparing homosexuality to incest. If anything, according to Hice, it is the Christian community that faces government discrimination as a result of a Satanic plot to “chip away” at “our Christian rights.”

His theological views also make him skeptical of women running for public office, saying a woman should only do so if she remains “within the authority of her husband.”

4. Glenn Grothman   Wisconsin state senator and anti-Kwanzaa crusader Glenn Grothman is running for an open House seat, from which he hopes to legislate in the same manner as his “soul mate” Rick Santorum.

Not one to hold back, Grothman has lambasted union activists protesting a law targeting labor rights as “slobs” and proposed doing away with the weekend and paid sick leave. So fearful of “Big Government” is Grothman that he also tried to put an end to municipal water disinfection programs.
Grothman opposes abortion rights without exceptions in cases of rape, incest and a woman’s health, even working to make it a felony offense for a doctor to perform an abortion that could save a woman’s life.

He opposes laws protecting employees from discrimination based on sexual orientation, and once tried to strip a sex education bill of a nondiscrimination provision that he suspected was part of a plot to make kids gay. Grothman also demanded that his state refuse to follow a court order to recognize same-sex marriages, which he feared would “legitimiz[e] illegal and immoral marriages.”

Not content with just opposing gay rights in the U.S., Grothman also defended a Ugandan law that makes homosexuality a crime punishable by sentences including life in prison.

5. Zach Dasher  Taking advantage of his family’s new-found reality TV fame, “Duck Dynasty” cousin Zach Dasher is running for U.S. Congress in Louisiana in an election where the top two candidates advance to a runoff vote if no candidate takes over 50 percent of the vote.

Dasher cited the success of “Duck Dynasty” as one of the reasons he entered the race: “Five years ago, I didn’t see an opportunity or window of opportunity to get into this type of venture. But here recently, obviously with the family name and being able to get my message out there, I saw an opportunity that I couldn’t pass up.”

Of his uncle Phil Robertson, who came under fire for making statements in a magazine interview defending Jim Crow and demonizing gays and lesbians, Dasher gushed: “The support of the family means a lot to me. We share a very similar background and philosophy, and our spiritual