On Immigration Is the GOP Courting a Long Term Backlash? 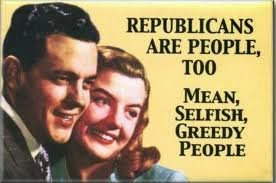 Despite the reality of the country's changing demographics and changing social views, in its quest to win control of the U.S. Senate the Republican Party shamelessly pandering to the ugliest elements of the party base: Christofascists, white supremacists and, of course, those so driven by greed and a desire for lower taxes that they care nothing about the nation's crumbling infrastructure much less the poor and the needy.  A part of this racists and bigoted ploy is a focus on immigration even in states with tiny foreign born populations.  Even if the short term ploy works in two weeks, the question remains as to whether the GOP is cutting its own throat in the longer term.  A piece in the New York Times looks at the phenomenon and where it may take the GOP in the long term.  Here are highlights:

Some Republicans are questioning the cost of their focus on immigration. Campaigning on possible threats from undocumented immigrants — similar to claims that President Obama and the Democrats have left the country vulnerable to attacks from Islamic terrorists and the Ebola virus — may backfire after November. At that point, the party will have to start worrying about its appeal beyond the conservative voters it needs to turn out in midterm elections.

“There is a sense in which, I think, the overwhelming desire to gain control of the Senate has kind of so fixated the party’s strategic brain trust that trying to get a hearing on long-term strategic issues doesn’t seem to be possible at the moment,” he [Ralph Reed] said.


Much of the harsh talk on immigration today may have to do with simple math. In the states that Republicans need to win to retake the Senate, Hispanics are a sliver of the electorate. Nationally, they make up 11 percent of eligible voters. But in the eight states with close Senate races, fewer than 5 percent of eligible voters are Latino, according to a new Pew Research report.


Colorado is the only state with a competitive Senate race where Hispanics make up a significant share of the electorate — 14 percent. As a result, Republicans there have steered clear of making immigration policy an issue. Faced with polling that showed immigration could help Representative Cory Gardner, the Republican Senate nominee, strategists there still decided not to focus on it.

In Kansas,  . . . The campaign of Senator Pat Roberts, a Republican, has been running an ad reminiscent of the infamous 1994 spot by Gov. Pete Wilson of California that showed immigrants racing across a busy highway to enter the country illegally. Mr. Roberts’ ad depicts two shadowy figures climbing a fence. “Illegal immigration is threatening our communities and taking jobs away from Kansans who need them,” the announcer says.

Opposition to the immigration bill that passed the Senate last year (and has languished in the House since) has become a focal point for many Republican candidates who denounce any “amnesty.” And the split between Republicans who support an overhaul and those who do not has led to some awkward moments on the campaign trail.

It is not just Republican candidates who are focusing on immigration to the concern of many in the party, but outside groups. Citizens United, the conservative political organization, is running ads in states like Arkansas attacking Democrats for being too easy on people who entered the country illegally.

David Bossie, president of Citizens United, said the issue of immigration was resonating at the moment because of how it played into the broader notion that the government was failing on a number of fronts, from fighting the Islamic State to responding to Ebola. “Can we trust the government to secure the border?” Mr. Bossie asked.

As for any long-term damage Republicans could suffer by alienating Hispanics, Mr. Bossie said, “I don’t go through life trying to calculate every single possible way things can and can’t go, because that’s an incredibly negative, jaded way to do things.”

The GOP has no long term strategy and I continue to hope that in the long run many in the GOP will look back and realized that by pandering to bigots they committed a slow form of political suicide.
Posted by Michael-in-Norfolk at Wednesday, October 22, 2014