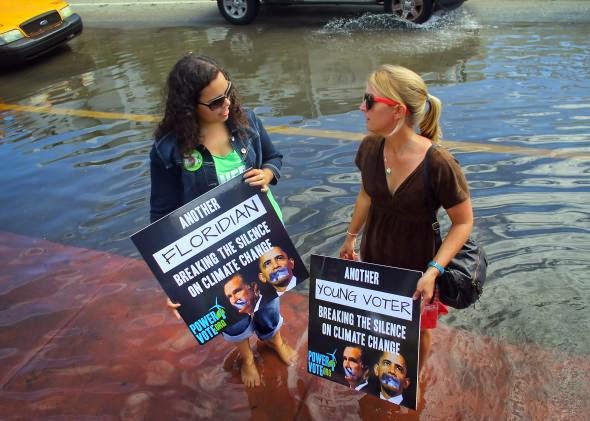 Like here in the Hampton Roads area of Virginia, in South Florida anyone sentient knows that climate change and rising sea levels is a real phenomenon that is threatening both property and civic vitality.  And like here in Virginia, the main obstacle to addressing the problem is that Tallahassee is full of inland yahoos who when not thumping their Bibles and denigrating minorities and gays have their heads in the sand denying what objective observation would tell them is the truth.  So what does a region imperiled by ignorance embracing cretins do?  Some in South Florida believe that the answer is to secede from the rest of the state.  A piece in Slate looks at the situation which mirrors the problem in the eastern half of Virginia.  Here are highlights:

One way or another, South Florida is leaving the rest of the state. The Mayor of South Miami just wants to speed that process up a bit.

An unprecedented lucky streak of few serious hurricanes is lulling South Florida residents into a false sense of security. The threat from powerful storms, mixed with the now inevitability of 10 feet of sea level rise, means that Miami will likely be one of the first American cities to wink out of existence due to climate change.


Sooner or later, Miami will sink into the sea.

In a resolution passed by the mayor and city commission on a 3-2 vote earlier this month, the City of South Miami proposed that, because of the unique threat climate change poses to its part of the state, the region should immediately break away and form the 51st state:

Whereas, South Florida’s situation is very precarious and in need of immediate attention. Many of the issues facing South Florida are not political, but are now very significant safety issues; and

Whereas, the creation of the 51st state, South Florida, is a necessity for the very survival of the entire southern region of the current state of Florida.

Mayor Philip Stoddard, quoted in the Orlando Sentinel—Disney World, by the way, would be part of the new state—didn’t mince words. “It’s very apparent that the attitude of the northern part of the state is that they would just love to saw the state in half and just let us float off into the Caribbean," Stoddard said. "They’ve made that abundantly clear every possible opportunity and I would love to give them the opportunity to do that.”
For the first time, a region of the United States is in a for-real existential battle, and its central government­—personified by Gov. Rick “I’m not a scientist” Scott—doesn’t seem to care.

The situation truly mirrors Virginia's problem: the rural western areas in Virginia are supported by the eastern and northern areas of the state, yet thanks to GOP gerrymandered districts, GOP extremists in the General Assembly block much needed legislation and infrastructure improvements.   Perhaps Southwest Virginia needs to break away and join West Virginia.
Posted by Michael-in-Norfolk at Friday, October 24, 2014

If you and your hubby wish to not drown, I will rent you the spare room! It's got bunk beds! HAHAHAHAHAA

I think we are safe in our home in Hampton. :) With the pumps, flood doors and whole house generator, we are ready. The only thing we haven't done - yet anyway - is to build a decorative seawall.