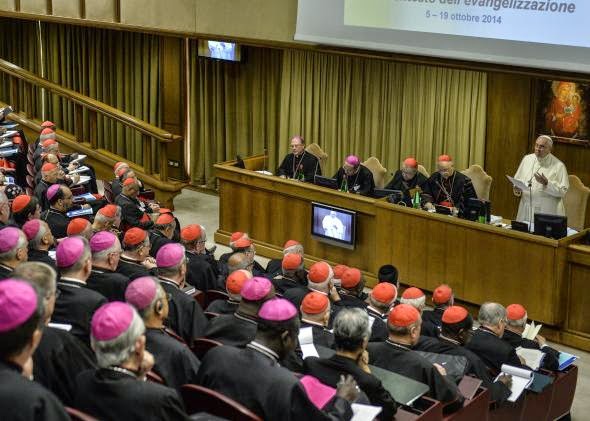 Like the evangelical and Southern Baptist Christofascists who seem driven to alienate as many thinking and decent people as possible in their quest to "save" Christianity, so too the bitter old men in dresses in Rome over the last two weeks - many of who gained their positions by being servile and obsequious ass kissers and embracing John Paul II and the Nazi Pope's reactionary positions, seem Hell bent to kill Catholicism in the west.  Why?  Because after suggestions that just maybe there might be changes in the Church's Medieval approach to women and gays, it now appears that - as I predicted - no change is in the offing.  Slate looks at how the forces of reaction have prevailed.  Here are excerpts:

Roman Catholic bishops voted down what would have been a historic shift in the church’s approach toward gays and the divorced. The draft report that called for greater openness toward these two groups did not get the necessary two-thirds majority at a Catholic Church synod even though the controversial sections had been largely watered down in recent days. The Vatican tried to play down the vote, saying the important fact is that the issue is being discussed in the first place. "It is important not to over-analyze," a Vatican spokesman said. "The fathers of the synod never saw themselves as reaching a final conclusion with this document."

But there was no hiding that the failure to get the votes illustrates “the deep divisions facing the hierarchy as Pope Francis continues his push for a more open church,” notes Josephine Mckenna of Religion News Service.

The document did not obtain a two-thirds majority among the almost 200 bishops who gathered at a Vatican assembly on the family even though the language that many had hailed as groundbreaking had been severely toned down since it was first revealed on Monday. The title of the section on gays, for example, switched from “Welcoming homosexuals” to “Pastoral attention towards persons with homosexual orientations.” While the original version included talk of “accepting and valuing their (homosexuals') sexual orientations” and providing a “a welcoming home” for gays, the final document merely said that discrimination “is to be avoided,” details Reuters. While the initial version talked of how members of same-sex couples could provide “mutual aid” and “precious support” to each other during difficult times, the new version makes it clear “there is no foundation whatsoever” to compare same-sex to opposite-sex unions.

Paragraphs that dealt with whether divorced Catholics could receive communion also failed to pass. During his final address to the Synod, Francis received a long standing ovation after he warned against “hostile rigidity” of “so-called traditionalists” while also criticizing progressives who would “bandage a wound before treating it.”

The BBC’s David Willey points out that while the paragraphs on gays and the divorced failed to get the two-thirds majority needed to be incorporated into the final document, they did get more than 50 percent of the vote. “This allows the necessary leeway for further discussion before the synod reconvenes in Rome in an expanded form in a year's time,” writes Willey.

This from the same church that condemned Galileo for heresy in 1633 and did not formally acknowledge its error until 1992.   Throughout the centuries, the Catholic Church has been routinely wrong, yet the bitter old closet cases prissily proclaim their infallibility.  Why does anyone listen to these individuals?