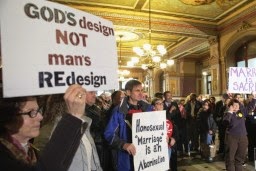 Other than one federal district court judge in Alabama, every federal court to rule on the constitutionality of state bans on same sex marriage has struck such bans down.  Now, in a somewhat unhinged opinion that attacks judges who have found that the 14th Amendment protects LGBT citizens, a federal judge in Puerto Rico has upheld that commonwealth's gay marriage ban.  Like Justices Thomas and Scalia, Judge Juan Perez-Gimenez seemingly believes that his personal views over ride the U.S. Constitution.  The next stop for the case will be the U.S. Court of Appeals for the 1st Circuit where it is thought the district court ruling faces a high probability of being reversed.  Think Progress looks at the ruling itself.  Here are highlights:

In an opinion that frequently crosses the line from visible rage to outright belligerence towards his judicial colleagues, a federal judge in Puerto Rico became one of just two federal judges to deny equal marriage rights to same-sex couples on Tuesday. Judge Juan Pérez-Giménez’s opinion accuses the overwhelming majority of federal judges who have sided with marriage equality of “inexplicable contortions of the mind or perhaps even willful ignorance.” At one point he appears to mock his colleagues, claiming that while the supposed fact that “this Court reaches its decision by embracing precedent may prove disappointing . . . there are some principles of logic and law that cannot be forgotten.” At another point, he claims that, if gay couples enjoy the same rights as straight couples, that will lead to a world where “laws barring polygamy, or, say the marriage of fathers and daughters” are “now of doubtful validity.”

The concluding section of Judge Pérez-Giménez’s opinion reads less like a judicial opinion than it does like a press release from the anti-gay National Organization for Marriage:


Recent affirmances of same-gender marriage seem to suffer from a peculiar inability to recall the principles embodied in existing marriage law. Traditional marriage is “exclusively [an] opposite-sex institution . . . inextricably linked to procreation and biological kinship,” Windsor, 133 S. Ct. at 2718 (Alito, J., dissenting). Traditional marriage is the fundamental unit of the political order. And ultimately the very survival of the political order depends upon the procreative potential embodied in traditional marriage.
Those are the well-tested, well-proven principles on which we have relied for centuries.

Notice the citation in this passage. Judge Pérez-Giménez relies on a quote from Justice Samuel Alito’s dissenting opinion in United States v. Windsor. Dissenting opinions are, by definition, not the law because they reflect the views of the judges or justices who were unable to persuade a majority of their colleagues.

Few judges believe, however, that Baker v. Nelson has any bearing on whether federal courts may consider marriage equality cases today. Indeed, Pérez-Giménez acknowledges this fact with a lengthy citation to other court decisions holding that Baker is no longer binding on lower courts. The list of cases that disagree with him is so long that it takes up nearly an entire page of his opinion.

So, while Pérez-Giménez clearly holds very passionate views on the question of whether same-sex couples are entitled to the same rights as everyone else, his views are unlikely to persuade many of his fellow judges. It’s even possible that his opinion could ultimately wind up bolstering the case for marriage equality. That’s because his decision will appeal to the United States Court of Appeals for the First Circuit, a court dominated by Democratic appointees (although, it is worth noting that Pérez-Giménez was appointed to the bench by President Jimmy Carter). All four of the states that comprise the First Circuit — Maine, Massachusetts, New Hampshire and Rhode Island — are already marriage equality states, so a decision out of a federal court in Puerto Rico is the only path to bring a marriage equality case before this circuit.

Given the makeup of the First Circuit, the overwhelming consensus among federal judges in favor of marriage equality, and the belligerent tone of Pérez-Giménez’s opinion, it is unlikely that his decision will be upheld on appeal.

It bears repeating that NONE of the Courts of Appeal that have ruled to date have found Baker v. Nelson to have any remaining precedent al relevance, particularly in light of the 2013 ruling in United States v. Windsor.
Posted by Michael-in-Norfolk at Wednesday, October 22, 2014