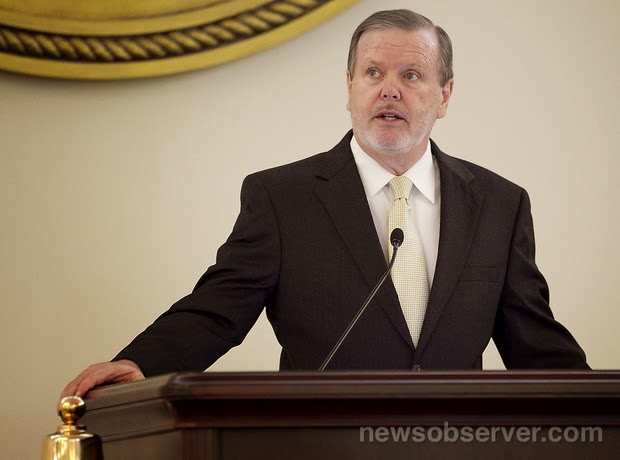 As I have noted numerous times, the Christofascists believe that they are above the laws that apply to all other citizens.  In short, they deem themselves entitled to special rights even as they disingenuously try to claim that it is LGBT Americans who want to be above the law.  Equally disturbing is the willingness of Republican elected officials to prostitute themselves to the Christofascists and introduce legislation that would grant Christofascists the special rights denied to others.  A case in point?  North Carolina Senate Leader Phil Berger Sr. (pictured above) who seeks to allow Christofscists to ignore their obligations as employees of the courts to marry all citizens with legally valid licenses.  Never mind that (i) the protections of the First Amendment of the U.S. Constitution only involve the freedom to practice one's religion in the house of worship of their choice and the freedom from having to financially support an established state religion, and (ii) the behavior of the Christofascist magistrates is no different that that of magistrates who in the past refused to marry interracial couples after the ruling in Loving v. Virginia.   The News and Observer has details.  Here are highlights:

A top North Carolina Republican said Tuesday that he will back a bill protecting state officials who refuse to issue marriage licenses or perform weddings for same-sex couples.

Senate Leader Phil Berger Sr. said he will introduce legislation in response to a magistrate in his home county who decided to resign instead of agreeing to marry gays, citing his personal religious views.

The state court system has said any magistrates who refuse to heed the recent federal court ruling striking down the state's same-sex marriage ban are violating their oaths and could face dismissal. Berger said magistrates and registers of deeds who refuse service to gay couples are within their rights under constitutional protections guaranteeing freedom of religion.

Berger announced his plans Thursday at an event in Wentworth, standing beside the magistrate who resigned. His office declined an interview request from The Associated Press.

Berger and House Speaker Thom Tillis hired conservative lawyers to appeal the federal marriage ruling, after the state's attorney general declared all potential legal defenses had been exhausted. Tillis is currently in a tight campaign for the U.S. Senate. Both were strong backers of the now-defunct 2012 voter referendum that limited marriage to being between one man and one woman.

The recent case is not the first time state magistrates have cited religious objections to marrying certain couples. In 1977, AP reported that two Forsyth County magistrates refused to marry a black man and a white woman, nearly 10 years after the U.S. Supreme Court declared state bans on interracial marriage unconstitutional. The couple responded by filing a federal lawsuit against the state officials.

Read more here: http://www.newsobserver.com/2014/10/21/4252819_gop-leader-nc-officials-can-refuse.html?rh=1#storylink=cpy
The behavior of today's Christofascist anti-gay magistrates is in the final analysis no different than that of segregationists of 50 years ago.  It's all about using supposed religious beliefs to justify hate and bigotry.   The cynic in me cannot help but wonder when we will see news stories about Berger getting busted for soliciting gay sex in a public restroom or molesting underage boys.

Read more here: http://www.newsobserver.com/2014/10/21/4252819_gop-leader-nc-officials-can-refuse.html?rh=1#storylink=cpy
"Sen. Berger continues to waste taxpayer dollars and ignore the real issues of the day, like our economy, education, and the environment," said Chris Sgro, the executive director of Equality NC. "The issue at hand is not about individuals' rights to freedom of religion and Berger, as an attorney, should understand the law well enough to know that. The issue (is) employees of the State of North Carolina doing their jobs."

Read more here: http://www.newsobserver.com/2014/10/21/4252819_gop-leader-nc-officials-can-refuse.html?rh=1#storylink=cpy
There really is no differnce between today's anti-gay Christofascists and the
Posted by Michael-in-Norfolk at Tuesday, October 21, 2014