Will the GOP Get the Message in Kansas? 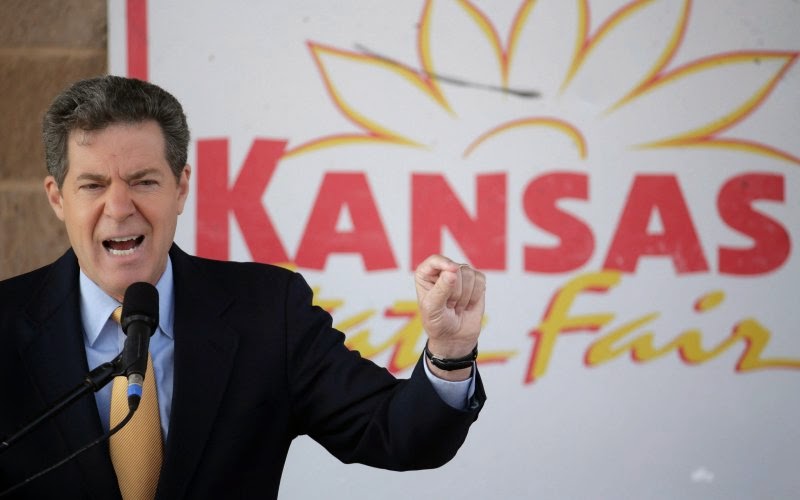 Many of us are hoping that the GOP will get a much needed message in Kansas with the re-election defeat of Gov. Sam Brownback and Senator Pat Roberts (as well as other GOP elected officials).  Based on the Congressional GOP's economic agenda recently reviewed in a post on this blog, even if Kansas goes blue, one has to question whether or not the message will be received.  After all, part of being a Republican nowadays is to reject objective reality in every form and to blindly cling to ideology and one's Bible. A piece in The Daily Beast asks whether or not the GOP will get the message that its 30+ year old policies simply do not work.  Here are excerpts:

For many political observers, the question about Kansas these days is no longer, “What’s the matter?” so much as, “What the fuck?”

There was the unexpectedly close GOP Senate primary—three-term incumbent Pat Roberts wound up winning by 7 points—and the forced retirement of the Democratic Senate candidate; there’s the fact that Gov. Sam Brownback, whose average margin of victory in state-wide races is 23 points, is now fighting for his political life. Tom Frank made the state famous for illustrating how its citizens elected conservative candidates whose actual policies went against the voters’ economic self-interest; after one term of Brownback’s “Tea Party experiment,” Kansas voters seem to have enlightened their self-interest and want to undo the extremism that Brownback both promised and delivered. The question remains as to whether their Republican candidates will ever wise up to the same conclusion.

Citing the state’s fiscal woes, moderate and not-so-moderate Republicans have flocked to Brownback’s opponent, Paul Davis, who trails by just 0.6 points. On the Senate front, independent candidate Greg Orman, who will likely caucus with the Democrats, is reaping the benefits of that Tea Party-weighted primary. “Traditional Republicans for Common Sense,” made up of 70 Republican moderates who served in the Kansas legislature, endorsed Orman and he is favored by independent voters by a margin of 30 points.

In the face of this, both Brownback and Roberts have chosen not to battle for the wide swath of Kansas voters who identify as moderate Republicans (47 percent, versus 38 percent “conservative Republicans”), but to move further to the right.

[O]ne has to wonder not just if the Republican leadership is shooting itself in the foot, but why it is. Is it misplaced, or at least short-sighted, cynicism, which might have them believe that their old white guy coalition (if you can call it that) will sustain them a few more cycles? (At least long enough to pass voting restrictions?) Or is it a form of psychosomatic blindness, a function of such deeply held, incorrect perceptions, that the party leaders literally cannot imagine the need to change their tactics, much less their policies?

In other words, are we dealing with cynics or zealots?  Obviously, one hopes for the former. Cynics respond to defeat, for one thing. Cynics and opportunists look at polls. Cynics are the lifeblood of representative democracy. Cynics will do anything to save their own skin, even change their minds.

Sadly, I suspect we are dealing with zealots who cannot grasp the reality that the nation is changing and pushing the same failed agenda is not the route to victory.   As for Brownback, he seems to think that attending every anti-gay rally is his ticket to reelection.
Posted by Michael-in-Norfolk at Friday, October 24, 2014