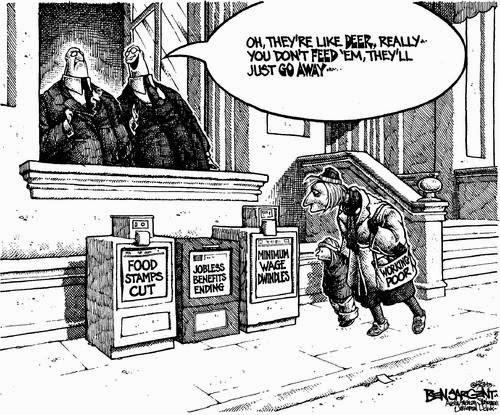 Pro-democracy protests continue in Hong Kong where particularly students and younger citizens want more say in electing government officials.  An interesting side note is that Hong Kong's Chief Executive, Leung Chun-ying, holds views that would thrill many in the Republican Party base - or at least those too stupid to realize that they'd ultimately be included in the ranks of those disenfranchised. Leung Chun-ying view in this instance?  That open elections are unacceptable because they could give the poor - and in the Republican's view, minorities - too much input into government. Andrew Sullivan has a post that looks at the Communist Chinese view as well as parallels with the GOP base.  Here are excerpts:

After a two-hour meeting between Hong Kong officials and protest leaders made no real progress toward resolving the standoff, the demonstrations continued yesterday, including some 200 protesters marching to the home of the territory’s Chief Executive Leung Chun-ying. Many are reportedly outraged over comments Leung made to the foreign press on Monday insisting that open elections were unacceptable because they could give the poor too much of a voice:

In an interview with a small group of journalists from American and European news media organizations, [Leung's] first with foreign media since the city erupted in demonstrations, he acknowledged that many of the protesters are angry over the lack of social mobility and affordable housing in the city. But he argued that containing populist pressures was an important reason for resisting the protesters’ demands for fully open elections. Instead, he backed Beijing’s position that all candidates to succeed him as chief executive, the top post in the city, must be screened by a “broadly representative” nominating committee appointed by Beijing. That screening, he said, would insulate candidates from popular pressure to create a welfare state, and would allow the city government to follow more business-friendly policies to address economic inequality instead.

Beinart ties this in with the debate over voter ID laws and early voting in the US, arguing that “Leung’s views about the proper relationship between democracy and economic policy represent a more extreme version of the views supported by many in today’s GOP”:

In 2010, Tea Party Nation President Judson Phillips observed that “The Founding Fathers … put certain restrictions on who gets the right to vote … one of those was you had to be a property owner. And that makes a lot of sense, because if you’re a property owner you actually have a vested stake in the community.”

In 2011, Iowa Representative Steve King made a similar observation, noting approvingly, “There was a time in American history when you had to be a male property owner in order to vote. The reason for that was, because [the Founding Fathers] wanted the people who voted—that set the public policy, that decided on the taxes and the spending—to have some skin in the game. Now we have data out there that shows that 47 percent of American households don’t pay taxes … But many of them are voting. And when they vote, they vote for more government benefits.”

Most prominent Republicans would never propose that poor people be denied the franchise. But they support policies that do just that.

My Republican fore bearers would be horrified to know that the political party they supported now holds views and supports policy derived from communist China and Putin's anti-gay Russia.
Posted by Michael-in-Norfolk at Thursday, October 23, 2014