Pat Robertson Whines About the Coming "Onslaught Of Homosexual Behavior" 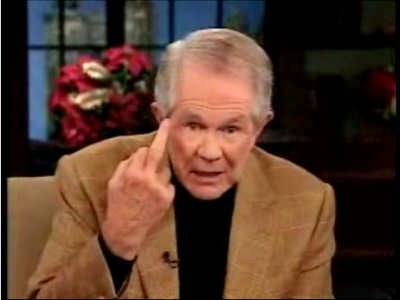 Living in the Hampton Roads area of Virginia, the home of the "misnamed Christian Broadcasting Network ("CBN") one becomes used to the reality that a month never goes by - sometimes it's not even a week - that local embarrassment and shyster televangelist Pat Robertson doesn't spout off some kind of batshitery that makes the region look as if its inhabited by a bunch of religious extremist fruitcakes.  One has to wonder how many progressive businesses Robertson frightens away from relocating to the area give the dim image he projects.  This week/month is no exception to the above rule as Robertson launched into a rant about gay marriage and the persecution of Christians, mentioning in the process the fraudulent "gay marriage victims" at the Hitching Post in Idaho.  Right Wing Watch looks at Robertson's latest bout of diarrhea of the mouth.  Here are highlights:

On "The 700 Club" today, Pat Robertson went all out on an extreme homophobic rant, claiming that same-sex marriage has "deadly consequences." He wasn't able to name one, but just making the accusation served his purposes. Robertson's Christian Broadcasting Network claims his show has a million viewers a day.

“This onslaught of homosexual behavior that is being forced on us by the Supreme Court of the United States is having deadly consequences,” Robertson told his audience. “I was afraid it was going to happen. It has happened now in Idaho.”

In Idaho, a for-profit wedding chapel owned by a pair of ordained ministers is claiming their city's anti-discrimination law forces them to marry same-sex couples.

They are suing the city, despite the fact that no same-sex couple has filed a discrimination complaint, nor has the city officially notified them they might be in violation of the law.

“If I were that couple, I’d get ahead of the curve. I’d get on an airplane and leave Idaho or get in your car and drive across the border into Montana,” Robertson said. “Get out of that state. And if need be, close your chapel down. I mean, just get out ahead of it because this is outrageous.”

Over 30 U.S. states have or are in the process of extending marriage to same-sex couples, including Montana.

Previously, this raving lunatic claimed that if gays have their way:

You’re either going to have sex with angels or have open sex with anybody or else you leave, or you go out of business. That’s America, you don’t want that, do you?”

The man belongs in a mental institution.
Posted by Michael-in-Norfolk at Tuesday, October 21, 2014