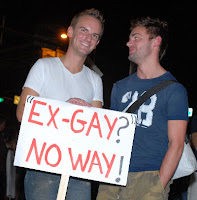 The Christofascists who support the use of fraudulent "ex-gay" therapy as a part of their effort to claim that homosexuality is a "choice" and "changeable" and that, therefore, gays deserve no legal protections, suffered a major defeat today when the United States Court of Appeals for the Ninth Circuit upheld California's ban on reparative therapy and "ex-gay" therapy for anyone under the age of 18 (the full opinion can be found here).  As one who tried for 37 years to "change" and to "pray away the gay." I know first hand that these programs are utter bullshit and little better than hiring a witch doctor to cast spells over you to "cure" you.  These programs are noting short of child abuse, and in my view, both therapists who use it on minors and parents who force their children to undergo it ought to be charged with criminal child abuse and prosecuted.  I'm sure the Christofascists will seek to appeal today's ruling to the U.S. Supreme Court which, if the justices have any sense will reject the appeal without an opinion.  Here are details from the opinon:

SUMMARY:  The panel held that Senate Bill 1172 regulates professional conduct, not speech and therefore was subject only to a rational basis review. The panel held that under its police power, California has authority to prohibit licensedmental health providers from administering therapies that the legislature has deemed harmful, and the fact that speech may be used to carry out those therapies does not turn the prohibitions of conduct into prohibitions of speech. The panel further concluded that the First Amendment does not prevent a state from regulating treatment even when that treatment is performed through speech alone. The panel concluded that the record demonstrated that the legislature acted rationally when it decided to protect the well-being of minors by prohibiting mental health providers from using “sexual orientation change efforts” on persons under 18.

SB 1172 was clear to a reasonable person and any incidental effect that the ban had on speech was small in comparison to its legitimate sweep; and (3) the ban did not infringe on the fundamental rights of  parents because parents do not have the right to choose a specific type of provider for a specific medical or mental health treatment that the state has reasonably deemed harmful.

A doctor “may not counsel a patient to rely on quack medicine. The First Amendment would not prohibit the doctor’s loss of license for doing so.”  Conant v. McCaffrey , No. C 97-00139 WHA, 2000 WL 1281174, at *13 (N.D. Cal.Sept. 7, 2000) (order) (unpublished);  see also Shea v. Bd. of  Med. Exam’rs, 146 Cal. Rptr. 653, 662 (Ct. App. 1978) (“The state’s obligation and power to protect its citizens by regulation of the professional conduct of its health practitioners is well settled. . . . [T]he First Amendment . . .does not insulate the verbal charlatan from responsibility for his conduct; nor does it impede the State in the proper exercise of its regulatory functions.” (citations omitted)); cf. Post, 2007 U. Ill. L. Rev. at 949 (“[W]hen a physician speaks to a patient in the course of medical treatment, his opinions are normally regulated on the theory that they are inseparable from the practice of medicine.”).

[W]here we conclude that SB 1172 lands, is the regulation of professional conduct, where the state’s power is great, even though such regulation may have an incidental effect on speech. See id.  (“Just as offer and acceptance are communications incidental to the regulable transaction called a contract, the professional’s speech is incidental to the conduct of the profession.”). Most, if not all, medical treatment requires speech, but that fact does not give rise to a First Amendment claim when the state bans a particular treatment.

There's much more, but you get the drift.  The Ninth Circuit ripped the "ex-gay" therapy proponents a new one and justifiably so.
Posted by Michael-in-Norfolk at Thursday, August 29, 2013