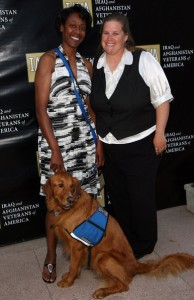 In this area of Virginia with its large number of military veterans - a significant number of whom are gay - a ruling by a federal judge in California could have a huge impact locally depending on how the Obama administration and the Department of Veterans Affairs respond.  The ruling held that the language of the federal statute that defines "spouse" for the purposes of veterans benefits as only opposite sex married couples was unconstitutional in the wake of the U.S. Supreme Court ruling in United States v. Windsor which struck down the Defense of Marriage Act.  I know a considerable number of legally married gay couples in which one or both of the members are military veterans or where one is currently actively serving in the military.   Think Progress looks at the ruling.  Here are highlights:

A federal judge in California has overturned Title 38 of the U.S. Code, which prevented veterans from receiving the same benefits for their same-sex spouses as straight veterans received. The decision comes less than a week after the Department of Veterans Affairs announced it could not provide benefits to same-sex couples, because even though the Defense of Marriage Act had been overturned, Title 38 still imposed discrimination for veterans benefits.

Without too much discussion, Judge Consuelo B. Marshall concluded that, just like DOMA, Title 38 served no rational basis:

Plaintiffs also argue that Title 38 is not rationally related to any military purpose, and cite Expert Declarations. Plaintiffs’ experts state that veterans’ benefits are essential to ensuring that servicemembers perform to their “maximum potential,” and other purposes justifying veterans benefits including readiness, recruiting, cohesion, and retention. The denial of benefits to spouses in same-sex marriages is not rationally related to any of these military purposes.

Additionally, Title 38 is not rationally related to the military’s commitment to caring for and providing for veteran families.

As the Washington Blade points out, the decision seems to enjoin the government only from denying benefits to the couple that filed this particular suit, Tracey Cooper-Harris and her wife, Maggie. Nevertheless, the rationale declares the entire law unconstitutional, so it likely provides the gateway for all veterans to receive benefits for their same-sex spouses.

This decision follows two other announcements from the federal government this week in regards to benefits for married same-sex couples. They will now be allowed to file their tax returns jointly and also access nursing home care together under Medicare.

One can just image the wailing and gnashing of teeth that must be taking place among Christofascists circles as another one of the legal constructs to keep gays inferior appears headed toward the trash heap of history.