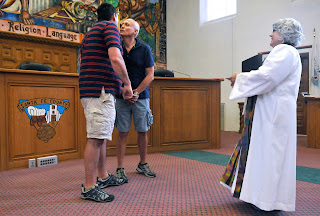 What began as a trickle with one county clerk issuing marriage licenses to same sex couples has become a raging torrent as all 33 of Mew Mexico's county clerks have voted to join in a petition seeking a ruling from the New Mexico Supreme Court confirming gay marriage.  With the announcement today by the IRS that it will recognize legally married same sex couples regardless of their state of residence and the Social Security Administrations signal to same sex couples to apply for benefits, the pressure on anti-gay states like Virginia which are becoming increasingly non-competitive in terms of attracting progressive businesses and entrepreneurs will be increasing markedly.  The Alburquerque Journal has details.  Here are highlights:

New Mexico’s 33 county clerks voted Wednesday to seek a state Supreme Court ruling on the legality of same-sex marriage, even as gay and lesbian couples continued flocking to county offices in all corners of the state.


The move came on another whirlwind day: Attorney General Gary King upholding the validity of marriage licenses issued to same-sex couples in 2004 by a former Sandoval County clerk; and the state Supreme Court turning down a request by the lawyer for two Santa Fe men to consolidate and take over several pending gay marriage lawsuits.

However, legal uncertainty over whether other county clerks should follow suit and whether clerks can alter marriage application forms to make them gender neutral prompted the clerks to take action Wednesday.


New Mexico is the only state that has not explicitly allowed or disallowed same-sex marriage — via legislation, a popular vote or a high court ruling, according to legal experts. That statutory uncertainty has led to a range of legal interpretations.

During a Wednesday conference call, county clerks voted 31-0 to have their attorney seek a state Supreme Court ruling to address their concerns and determine whether the constitution’s equal-rights protection allows for same-sex marriage, said Daniel Ivey-Soto, executive director of the New Mexico County Clerks Affiliate.

Since the floodgates opened, county clerks in most, if not all, 33 New Mexico counties have been visited by same-sex couples seeking marriage licenses, Ivey-Soto said. He said it’s expected that lawsuits will be filed against county clerks who refuse to issue them.

“Instead of getting picked off one by one, the county clerks decided they need an answer,” Ivey-Soto said. “County clerks need to know what is their responsibility.”   All the state’s county clerks — 21 Democrats and 12 Republicans — offered to have their names listed in court briefs, he said.

Meanwhile, a letter Attorney General King emailed on Wednesday to current Sandoval County Clerk Eileen Garbagni said a license issued by a county clerk in New Mexico is “presumptively valid” unless a court of competent jurisdiction acts to invalidate it.