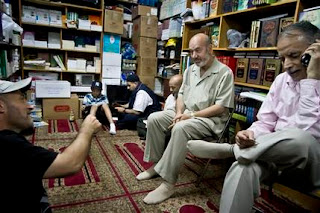 A story out of New York City underscores the danger of allowing police and government authorities to engage in domestic spying under the guise of "fighting terrorism" and/or protecting "national security."  The New York Police Department ("NYPD") has used the excuse of "fighting terrorism organizations" to designate entire mosques and all congregants as potential terrorists.  One can only imagine the outcry if certain extreme Christian churches and organizations such as the Family Research Council were treated in this manner.   Despite one's total innocence, you could unwittingly find yourself the subject of an investigation and fair game for surveillance.  I find this growing police state atmosphere to be disturbing to say the least.  Here are highlights from a piece in the Virginian Pilot:

The New York Police Department has secretly labeled entire mosques as terrorism organizations, a designation that allows police to use informants to record sermons and spy on imams, often without specific evidence of criminal wrongdoing.

Designating an entire mosque as a terrorism enterprise means that anyone who attends prayer services there is a potential subject of an investigation and fair game for surveillance.

Since the 9/11 attacks, the NYPD has opened at least a dozen "terrorism enterprise investigations" into mosques, according to interviews and confidential police documents. The TEI, as it is known, is a police tool intended to help investigate terrorist cells and the like.

Many TEIs stretch for years, allowing surveillance to continue even though the NYPD has never criminally charged a mosque or Islamic organization with operating as a terrorism enterprise.

The documents show in detail how, in its hunt for terrorists, the NYPD investigated countless innocent New York Muslims and put information about them in secret police files. As a tactic, opening an enterprise investigation on a mosque is so potentially invasive that while the NYPD conducted at least a dozen, the FBI never did one, according to interviews with federal law enforcement officials.

The revelations about the NYPD's massive spying operations are in documents recently obtained by The Associated Press and part of a new book, "Enemies Within: Inside the NYPD's Secret Spying Unit and bin Laden's Final Plot Against America." The book by AP reporters Matt Apuzzo and Adam Goldman is based on hundreds of previously unpublished police files and interviews with current and former NYPD, CIA and FBI officials.

The disclosures come as the NYPD is fighting off lawsuits accusing it of engaging in racial profiling while combating crime. Earlier this month, a judge ruled that the department's use of the stop-and-frisk tactic was unconstitutional.

The American Civil Liberties Union and two other groups have sued, saying the Muslim spying programs are unconstitutional and make Muslims afraid to practice their faith without police scrutiny.

Both Mayor Mike Bloomberg and Police Commissioner Raymond Kelly have denied those accusations. They say police do not unfairly target people; they only follow leads.

"As a matter of department policy, undercover officers and confidential informants do not enter a mosque unless they are following up on a lead," Kelly wrote recently in The Wall Street Journal. "We have a responsibility to protect New Yorkers from violent crime or another terrorist attack - and we uphold the law in doing so."


The NYPD did not limit its operations to collecting information on those who attended the mosques or led prayers. The department sought also to put people on the boards of New York's Islamic institutions to fill intelligence gaps.

We've seen this type of conduct before - in the Third Reich.   I can just imagine how real Islamic terrorist will use this conduct by NYPD to recruit enemies of America.
Posted by Michael-in-Norfolk at Wednesday, August 28, 2013