Catholic Dioceses to Collide with Virginia GOP Over Immigration Reform 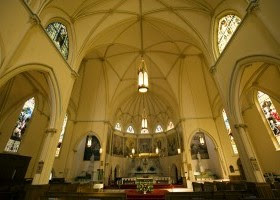 In all candor, today's Republican Party of Virginia is largely comprised of far Christofascists, Tea Party extremists, white supremacists and a few old time Republicans who refuse to face the reality that the GOP has morphed into something ugly.  Not surprisingly, immigration reform is not favored by the Virginia GOP and its anti-immigrant and anti-minority base.  Now, the Virginia GOP is about to collide with the Roman Catholic dioceses in Virginia which are putting on a push for passage of the Senate backed immigration reform bill that would provide a pathway to citizenship.  While the Virginia GOP and the Catholic bishops have been allies in the war on women's' health and gay rights, immigration provides a sharp break in the allied effort.  The Virginian Pilot looks at the Catholic push for immigration reform.  Here are excerpts:

More than a half-million Roman Catholics in Virginia will be asked at Sunday Mass on Sept. 8 to lobby their congressmen to pass immigration changes that give a path to citizenship for people living illegally in the United States.

The campaign is part of a national effort by American Catholic church leaders who say it's time to change U.S. immigration laws to make it easier for low-skilled workers to immigrate here, and to preserve family unity.

"We think there is unprecedented opportunity today to fix a broken immigration system," said Jeff Caruso, executive director of the Virginia Catholic Conference, which handles legislative affairs for Virginia's two bishops. "We look at it through the lens of family. A lot of times deportation polices have the consequences of separating children from their parents."

Their lobbying probably will encounter resistance from several of the commonwealth's federal lawmakers, including some in Hampton Roads, who dislike the idea of giving the estimated 11 million people illegally living in the country a special route to legal status.

In addition to priests addressing the issue from the pulpit, Caruso said parishioners throughout the commonwealth will receive a one-page insert in their church bulletins explaining the issue, along with contact information for members of Congress.

Long interested in reforming what they view as a failing system, the bishops and other supporters have stepped up their lobbying since the Senate passed a sweeping immigration overhaul in June. The measure includes a provision to allow millions of people illegally living in the United States to take steps toward citizenship under procedures that can take 13 years, as well as proposals to beef up border security and other changes. Virginia's two U.S. senators, Mark Warner and Tim Kaine, voted for it.

Rep. Scott Rigell, R-Virginia Beach, who also opposes the Senate bill, has yet to see a path to citizenship proposal that he would support, said his spokeswoman, Kim Mosser Knapp. Rigell is interested in helping children in the country illegally, she said.

One can only hope that Virginia's immigrant and Hispanic voters are watching carefully and will realize that they need to turn out in force and vote against the GOP's statewide slate in November in order to send a strong message to the GOP.
Posted by Michael-in-Norfolk at Wednesday, August 28, 2013