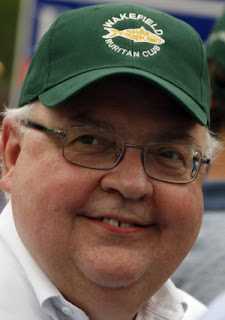 The Republican Party of Virginia has nominated the most extreme - and my opinion mentally ill - slate of statewide candidates in Virginia's history thanks to Ken Cuccinelli's maneuver to have the nominating process done through a state wide convention dominated by Christofascists and Tea Party lunatics.  Anyone sane should have seen that many long time Republicans simply would not be able to hold their noses and vote for individuals better suited for incarceration in a mental institution that state wide elected office.  Among those fleeing this GOP created nightmare is Boyd Marcus (pictured at left), a long time GOP operative who simply could not stomach the thought of Ken Cuccinelli in the Governors mansion.   The fall out of this notable defection continues as noted in a column in the Richmond Times Dispatch.  Here are column excerpts:


To Virginia Republicans, he is the “Prince of Darkness.” To veteran reporters, he is the “smiling assassin.” His watchwords, from Shakespeare’s “Julius Caesar,” were framed on his office wall: “Cry ‘Havoc!’ and let slip the dogs of war.”

Boyd Marcus runs Republican campaigns. He can run opponents into the ground with tough talking points and slasher direct-mail. He ran state government as Gov. Jim Gilmore’s chief of staff. He ran off allies as partisan enforcer of the budget-busting no-car-tax plan.

Marcus is on the run from a Republican Party he no longer recognizes.  He is doing the unthinkable: crossing over to the Democrats. He’s taking a job, paying up to five-figures a month, as a strategist for gubernatorial nominee Terry McAuliffe. It follows a months-long courtship, direct and indirect, that accelerated after the fight over new road taxes.

Marcus, a reflexive Republican, said in a written statement he is supporting McAuliffe, a reflexive Democrat, because the candidate is a pragmatic bipartisan. Marcus also cited McAuliffe’s business credentials . . . .

The Marcus defection is no laughing matter.  For Republicans, it feeds a troubling narrative about Ken Cuccinelli that he, alone, composed: The Republican candidate for governor — heartthrob of tea partiers and Rand Paul-ites who have no use for suburban, business-oriented R’s such as Marcus — does not work or play well with others. This is a dominant feature in the broad-strokes portrait Democrats are painting of Cuccinelli in their nonstop television and online advertising.

Cuccinelli depicts the Marcus break as a grab for cash by a guy who could use some. Further, Cuccinelli says Marcus is motivated by spite, having seen Bolling, who was waiting in line to run, lose the nomination to someone who jumped in front.

“If there’s one thing people don’t like, it’s a Benedict Arnold,” said Chris LaCivita, Cuccinelli’s lead adviser. “You’re either a sore loser or a sellout. Boyd Marcus happens to be both.”

Cuccinelli can spin all he wants.  The bottom line is that he's a detestable individual who is unfit to be governor.  Marcus sees this and it drives Cuccinelli crazy (or at least crazier).