Ken Cuccinelli Lies About His Agenda on Birth Control 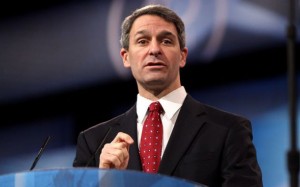 Like Mark Obenshain, the far right extremist GOP nominee for Virginia Attorney General, GOP gubernatorial candidate Ken Cuccinelli  - a/k/a Kookinelli - is striving to dupe voters into believing that he is a moderate as opposed to the far right religious zealot he is in fact.  Today we saw this effort on display when Kookinelli lied through his teeth and told an audience in Loudoun County, Virginia, that he had no agenda to restrict access to birth control.   The problem is that Kookinelli's record in the Virginia Senate and as Attorney General tells a very different story.  Thus, the truth is that Cuccinelli seeks to close all abortion service providers and would similarly shut down Planned Parenthood even though 97% of that organization's services have nothing to do with abortion.  Think Progress looks at Cuccinelli's disingenuous lies.  Here are highlights:

Speaking at an event in Loudoun County, VA, on Tuesday afternoon, Virginia’s Republican candidate for governor indicated that he does not support any new restrictions on birth control. Attorney General Ken Cuccinelli said that “government legislation shouldn’t address contraception” — despite the fact that his record says otherwise.

The woman pressed him on the issue, pointing out that supporting far-right personhood measures would “automatically” threaten access to birth control by defining life as beginning at conception. She wanted to know whether to believe the “rumors” in TV ads that claim Cuccinelli favors placing those restrictions on women’s reproductive rights. Cuccinelli responded sharply: “I wouldn’t call them rumors. I might call them lies.”

At a press conference following the event, the Republican candidate was even firmer. “I’ve never supported legislation that invades people’s choices about contraception,” Cuccinelli asserted.

In fact, those comments are a sharp departure from Cuccinelli’s actual record on the personhood issue. In 2007, Cuccinelli co-sponsored a unsuccessful measure to define life as beginning at the moment of conception, which would have outlawed all abortions and some forms of birth control. In 2012, in his role as Attorney General, he endorsed legislation that would have updated the state constitution to grant personhood rights to fertilized eggs. Speaking in support of that proposal, Cuccinelli noted that the fight for personhood “is going to last for all of our lives.”

And even outside of personhood, the attorney general hasn’t exactly proven himself to be a strong supporter of sexual health resources. An outspoken opponent of the health reform law, Cuccinelli filed a lawsuit against it in 2011 — even though repealing Obamacare would obviously eliminate its birth control provision that ensures thousands of women can access contraception through their employer-sponsored health plans without an extra co-pay. And in 2005, Cuccinelli attempted to censor a safe sex event at a university because he considered booths with information about preventing unplanned pregnancies and STDs to be a “soft core porn show.” He has also waged wars against abortion clinics and oral sex.

Back in 2003, Cuccinelli even opposed a bill to make it clear that contraception isn’t a form of abortion, which could have helped protect women’s birth control access from falling victim to anti-abortion attacks.

“Ken Cuccinelli is trying to muddy the waters on issues important to women and we’re not buying it,” Cianti Stewart-Reid, the executive director of Planned Parenthood Virginia PAC, said in a statement. “The truth is, he is one of the most extreme candidates Virginia has ever seen, and that’s why we’ll be working double time to educate Virginia voters about the high stakes for women’s health this November.”