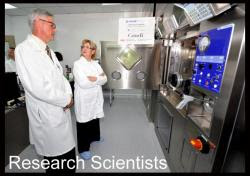 While the Republican Party has become the anti-knowledge party as a result of it having been hijacked by the Christofascists and moronic members of the Tea Party crowd, it nevertheless does not bode well for America's future that the sequestration cuts caused by GOP intransigence are cause nearly 20% of U.S. scientists to consider moving overseas in pursuit of better funding.  America has long been a leader in scientific research and development, but a mass exodus of research scientists could leave the country in a non-competitive position.  This may be fine with those who choose to leader their lives according to the anonymous writings of Bronze Age herders, but sentient individuals should be deeply concerned.   Here are excerpts from a Huffington Post piece that looks at this worrisome development:

New data compiled by a coalition of top scientific and medical research groups show that a large majority of scientists are receiving less federal help than they were three years ago, despite spending far more time writing grants in search of it. Nearly one-fifth of scientists are considering going overseas to continue their research because of the poor funding climate in America.

The study, which was spearheaded by the American Society for Biochemistry and Molecular Biology (ASBMB) and will be formally released next week, is the latest to highlight the extent to which years of stagnant or declining budgets, made worse by sequestration, have damaged the world of science.

More than 3,700 scientists from all 50 states participated in the study, offering online responses in June and July 2013. They offered sobering assessments of the state of their profession. Eighty percent said they were spending more of their time writing grants now than in 2010, while 67 percent said they were receiving less grant money now than they were back then. Only two percent of respondents said they had received money from their employers -- predominantly academic institutions -- to make up for the loss of federal funds.

The drying up of resources has had a damaging effect on the research being conducted, forcing scientists to curtail their projects or trim their staffs.

Sequestration is responsible for much of the damage being done to scientific research. The sweeping federal budget cuts have decreased funding for research and development projects across a wide swath of government agencies by $9.3 billion. The $1.7 billion budget cut to the National Institutes of Health alone has meant more than 700 fewer grants were funded this year, NIH Director Francis Collins told The Huffington Post.