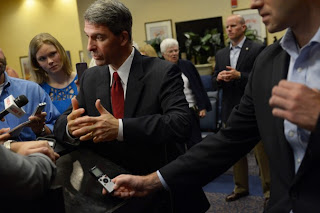 Having been through a very nasty divorce myself after coming out, I know first hand that father's sometimes get the short end of the stick, especially if they are gay and have a homophobic divorce court judge.  That said, however, I cannot understand the mindset of men who want to walk away from support obligations for their children.  It's an issue that should have nothing to do with how much one may despise the soon to be ex-wife.  Yet there are "fathers' rights" organizations around the country that critics say want to reduce child support responsibilities, distort facts about domestic violence and seek to undermine the rights of women in divorce situations.  Not surprisingly GOP gubernatorial candidate Ken Cuccinelli has ties to these groups and won their endorsement.  Democrat, Terry McAuliffe - who already enjoys a significant lead over the woman vote - rightly has jumped on Cuccinelli's alliance which undermines his claim to be concerned about women and children.  The Washington Post looks at the unfolding story.  Here are article highlights:

Grignol is also the former leader of Fathers for Virginia, which seeks to “empower divorced fathers as equal partners in parenting,” and of a second group that contends that men are frequently victimized by false allegations of domestic abuse. Grignol did not respond to requests for comment about the groups, which some women’s rights organizations have accused of distorting the facts about domestic violence.

Fathers’ rights groups have urged states to revise their laws to grant men more time with their children in joint custody proceedings. They have been criticized by some women’s groups for seeking to reduce child support payments.

Minnesota Gov. Mark Dayton (D) and Florida Gov. Rick Scott (R) have both vetoed “equal parenting” bills this year that would, among other things, increase the minimum amount of time fathers get with their children in joint custody agreements. Critics of such measures say they remove too much discretion from family court judges.

McCormick said his group hopes to pass similar legislation across the country and “were Ken Cuccinelli to become the governor of Virginia, we believe he might well be receptive to signing it.”

As a state senator in 2005, Cuccinelli offered a bill that would have made it so parents initiating a no-fault divorce could have that action counted against them “when deciding custody and visitation.” The measure never came to a vote, but Cuccinelli won praise from Stephen Baskerville, then-president of the American Coalition for Fathers and Children, for fighting against the no-fault divorce “epidemic.”

Cuccinelli also was the lone Senate vote against legislation to increase child support payments by tying them more closely to inflation.

A National Organization for Women advisory committee on family law wrote last year that fathers’ rights groups’ “true objectives are to discriminate against, control and punish women by gaining custody of children and to denigrate the personal and economic sacrifices made by mothers for their children.”

Cuccinelli may claim that he's pro-family, but in reality he is only pro one kind of families: those headed by heterosexual males (or deeply closeted and self-loathing gays like himself).   The man is a menace to Virginia's future.