The Other Race Virginians Need to Watch This Year 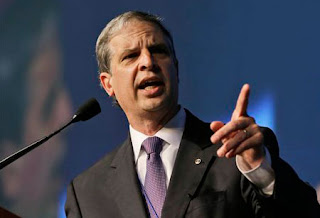 The following is a cross posting of an op-ed I wrote at LGBTQ Nation that looks at GOP attorney general Mark Obenshain's dishonest effort to paint himself as a moderate.  The man is just as extreme as Ken Cuccinelli and the utterly insane "Bishop" E. W. Jackson.  Here's the piece in its entirety:

Given its off year elections, Virginia is attracting a good deal of attention among political observers.  LGBT Virginians, women and minorities likewise ought to be paying close attention. Why?  Because the Republican statewide ticket — which was nominated at a convention dominated by far right religious extremists and Tea Party fanatics (who usually also identify as “conservative Christians”) — is the most extreme in Virginia’s history.

There has been a great deal of media coverage of the GOP gubernatorial candidate Ken Cuccinelli who has a bizarre fixation on reinstating Virginia’s “crimes against nature statute,” is a climate change denier, and who has shown himself to be ethically challenged at best as he has taken gifts and campaign contributions for those who have sought a quid pro quo from the Attorney General’s office, which Cuccinelli currently occupies.

Likewise, there has been plentiful media coverage on Lt. Governor candidate E.W. “Bishop” Jackson who has made off the fall anti-gay statements, insulted civil rights leaders and generally shown himself to inhabit some strange alternate universe from sentient persons.
In fact, Jackson makes AFA’s Bryan Fischer and FRC’s Tony Perkins appear to be fairly rational in comparison.

Lacking in similar coverage has been the GOP nominee for Attorney General, Mark Obenshain, who, if one knows his background and voting record in the Virginia General Assembly is every bit as extreme and – I would argue insane – as Cuccinelli and “Bishop” Jackson.

Despite his extremism as evidenced by his past record, Obenshain has been trying to reinvent himself as a “moderate” and even claimed that he doesn’t support discrimination against anyone (more on this later).
As a recent article in the Virginian Pilot noted, the attorney general race deserves much closer attention than it is currently receiving for several reasons.
First, the next attorney general will help frame the national perception of Virginia, and his name is likely to appear at the top of the 2017 ballot because historically Virginia’s attorney general has run, or resigned to run, for governor in every election, including this one, dating to 1993.
Second, under Virginia law, the Attorney General interprets Virginia’s statutory law and determines which laws meet constitutional muster under both the Virginia Constitution and the United States Constitution.

For example, Obenshain has pledged to continue fighting President Barack Obama’s Affordable Health Care Act (a.k.a. “Obamacare”), either by filing briefs in a pending legal challenge or by filing a new lawsuit.

Also, his Democrat opponent, Mark Herring, has said he wouldn’t defend Virginia’s anti-sodomy statute because it’s clearly unconstitutional while Obenshain will likely seek to defend it despite trying to pretend to be noncommittal.

Like Cuccinelli, Obenshain refuses to recognize the full scope of the Supreme Court’s ruling in Lawrence v. Texas and is so thoroughly under the thumb of the Christofascists at The Family Foundation (an affiliate of Focus on the Family and registered hate group, Family Research Council) that he will no doubt refuse to accept the ruling by the U.S. Court of Appeals for the Fourth Circuits’s decision striking down Virginia’s sodomy statute for a second time.

Why do I come to this conclusions? Obenshain’s record in the Virginia General Assembly confirms that he is every bit as extreme as Ken Cuccinelli and “Bishop” Jackson.

Here’s an overview of Obenshain’s record:

1.   Obenshain has previously introduced a bill that would have required any woman in Virginia who has a miscarriage without a doctor present, to file a report it within 24 hours to the police or otherwise risk going to jail for a full year.  Obenshain’s bill read in part as follows:

When a fetal death occurs without medical attendance upon the mother at or after the delivery or abortion, the mother or someone acting on her behalf shall, within 24 hours, report the fetal death, location of the remains, and identity of the mother to the local or state police or sheriff’s department of the city or county where the fetal death occurred. No one shall remove, destroy, or otherwise dispose of any remains without the express authorization of law-enforcement officials or the medical examiner. Any person violating the provisions of this subsection shall be guilty of a Class 1 misdemeanor.


For those unfamiliar with Virginia law, a Class 1 misdemeanor cares a 1 year jail sentence and a fine of $2,500.00.


2.  Obenshain has supported a “personhood” bill that would outlaw all abortions and grant full constitutional rights to a fetus from the moment of conception.

3. In 2013 Obenshain sponsored a bill requiring limited types of photo identification as part of the Virginia GOP’s active effort to disenfranchise minority voters. Acceptable forms of ID include a government-issued photo ID that includes their address, a photo ID from a Virginia college or university, or a workplace ID featuring a photo.  Regular Voter ID cards would not be sufficient.

5.  In January, 2013, Obenshain walked off the Senate floor rather than support former Richmond prosecutor Tracy Thorne-Begland, who is openly gay, for a Richmond General District Court judgeship.  In 2012, other GOP extremists in the House of Delagate blocked Thorne-Begland’s appointment but were out maneuvered by the Richmond Circuit Court judges who appointed him on an interim bases after Thorne-Begland received unanimous backing from the five largest mega-law firms based in Virginia.

In short, despite his recent pretenses, Obenshain is anti-gay, anti-minority and anti-women’s rights.

If Virginians want a quasi-theocracy in Virginia, they can vote for Obenshain and his fellow extremists on the GOP ticket.  If, instead, they believe in the principles of Thomas Jefferson and the other Founding Fathers from Virginia, their choice is clear: vote for Mark Herring for Attorney Genaral, Terry McAuliffe for Governor, and Ralph Northam for Lt. Governor.