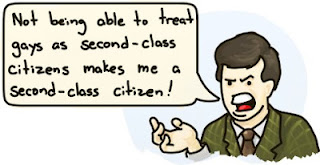 As growing public push back and court rulings are eroding the ability of Christofascists to impose their fear and hate based religious beliefs on society, the "godly folk" are having a complete conniption fit.  As is typical of these less than nice people, they view any restriction on the ability to trample of the constitutional rights of other citizens as an attack on "religious liberty."  In the Christofascist world view, it is they and they alone who are entitled to religious freedom.  Everyone else is supposed to knuckle under to them and forfeit their own rights.  A rant in the Baptist Press over the recent ruling against "Christian" photographers who refused to provide services to a same sex couple symbolizes this selfish and self-centered mindset.  Here are highlights:


ALBUQUERQUE (BP) -- An attack on religious liberty is evident in the New Mexico Supreme Court's ruling that two Christian photographers violated the state's Human Rights Act by refusing to photograph a same-sex "commitment ceremony," according to several Southern Baptist commentators.

"Anyone who still doubts that the normalization of homosexuality and the legalization of same-sex marriage will represent a seismic shift in the culture at large needs only to look to New Mexico to see that nothing less than religious liberty is now under threat -- and in a big way," R. Albert Mohler Jr., president of the Southern Baptist Theological Seminary, wrote in an online column Aug. 26.

Russell D. Moore, president of the SBC Ethics & Religious Liberty Commission, said the Aug. 22 ruling "demonstrates, once again, that where we are headed is the state-established religion of sexual liberation, with the law used to steamroll every conscience in the way."

According to state Supreme Court Justice Richard Boson, the Constitution protects the rights of the Christian photographers to pray to the God of their choice and follow religious teachings, but he noted that belief and practice are not the same things. Religious liberty, Boson wrote, must be subordinated to the state's anti-discrimination laws, and that the photographers -- and by extension others -- are "compelled by law to compromise the very religious beliefs that inspire their lives."

"The Huguenins today can no more turn away customers on the basis of their sexual orientation -- photographing a same-sex marriage ceremony -- than they could refuse to photograph African-Americans or Muslims," Bosson wrote. "The Huguenins have to channel their conduct, not their beliefs, so as to leave space for other Americans who believe something different. That compromise is part of the glue that holds us together as a nation, the tolerance that lubricates the varied moving parts of us as a people."

"The New Mexico Supreme Court has now made clear that the price to be paid by many is the forfeiture of their religious liberty," Mohler wrote.
Kelly Boggs, director of public affairs for the Louisiana Baptist Convention and editor of the Baptist Message, wrote in his weekly column on Baptist Press Aug. 23 that the ruling is evidence that the push "to have homosexuality accepted as natural, normal and healthy in the United States knows no compromise.

The "moment of truth is rapidly approaching" for Christians who believe homosexuality is "an immoral, aberrant behavior," he wrote.  "The choice will be whether to capitulate to a culture that asserts, without evidence, homosexuality is natural, normal and healthy, or to insist it is sinful and suffer consequences."