McAuliffe Calls Cuccinelli Out As Threat to Birth Control 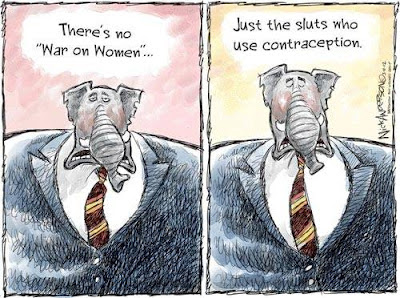 I recently noted how GOP gubernatorial candidate Ken Cuccinelli - a//k/a Kookinelli - lied through his teeth to a crowd in Loudoun County when he claimed that he had no plans to limit birth control and contraception.  Of course, in the process of making that statement Kookinelli conveniently ignored his extensive anti-contraception voting record while in the Virginia Senate and his actions as Attorney General.  Thankfully, Democrat candidate has called Cuccinelli out and did everything short of calling Cuccinelli a lair - which is, of course what Cuccielli is without a doubt.  The Virginian Pilot looks at McAuliffe's justified statements about Kookinelli.  Here are highlights:

Terry McAuliffe, the Democratic candidate for governor, today accused his opponent of trying to “whitewash” his record on women’s health issues.

Attorney General Ken Cuccinelli, the Republican candidate, told a questioner in Northern Virginia on Tuesday that he would not support legislation that seeks to restrict access to contraception. “I don’t think government should be doing anything about birth control,” he was quoted as saying.
McAuliffe, speaking to a group of students today at Tidewater Community College, said Cuccinelli is not being honest with voters.

“He totally whitewashed his record,” McAuliffe said, noting that Cuccinelli has supported so-called “personhood” legislation declaring that life begins at conception. The American Congress of Obstetricians and Gynecologists has warned that such measures could deny access to some forms of birth control.

McAuliffe was accompanied by Dr. Karen Remley, who resigned as state health commissioner last year over controversial new regulations imposing stricter architectural standards on abortion clinics. When the state Board of Health voted to exempt existing clinics from the new standards, Cuccinelli told board members they had exceeded their authority and could be denied state legal counsel if they disregarded his advice.

“I resigned because the attorney general overreached his authority and stepped on the authority of not just me but all of us,” Remley told the students. “Equal rights to access for health care, especially women’s health care, is very, very important to me.”

Remley said McAuliffe understands it’s important that women “have the opportunity to make choices that they want to make with their health care provider, not with politicians involved in the middle of those decisions.”

Having followed Christofascist organizations who support Cuccinelli for over a decade, one of their number one goals is to see a reversal of the U.S. Supreme Court ruling in Griswold v. Connecticut which struck down bans on contraception for MARRIED HETEROSEXUAL COUPLES and established a right to privacy that reappeared in Roe v. Wade.    Cuccinelli can lie all he wants, but his support for "personhood", his attacks on Planned Parenthood, and his support for bans on abortion under all circumstances tell the true story.  For more information on McAuliffe's plan for women's health, check out the information here.
Posted by Michael-in-Norfolk at Wednesday, August 28, 2013